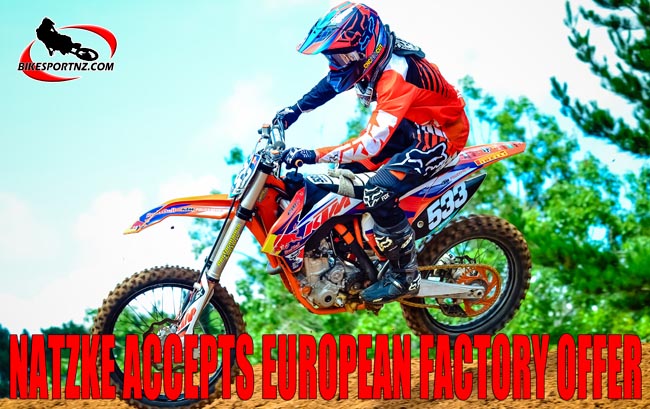 The New Zealand nation anthem could soon again be ringing out at a Grand Prix motocross track in Europe.

That’s the plan anyway, as Waikato teenager Josiah Natzke revealed this week that he had accepted a five-year contract to race for the Red Bull Factory KTM team, starting with the European 125 (EMX125) Championships next season.

He will be a part of the Stefan Everts’ KTM Factory Juniors race team.

The 15-year-old Hamilton rider, who became the youngest ever senior national 125cc champion earlier this year and raced with great success at the penultimate round of the EMX125 Championships in Loket, Czechoslovakia, in July, turned heads with some of the sport’s movers and shakers.

He impressed them enough to receive an offer from the KTM factory’s race team manager, Belgium’s 10-time former world motocross champion Stefan Everts, to join the squad for the upcoming 2015 EMX125 Championships.

Natzke will race for the CMR Red Bull KTM team in the MX2 (250cc) class at the New Zealand Motocross Championships in February and March and the immediately pack his bags for Lummen, near Hasselt in Belgium, where he will join the Red Bull KTM factory team set-up.

It is a multi-year contract. Natzke will race the EMX125 class for the first year, with the potential to move up to the EMX250 class or into the MX2 Grand Prix competition.

“My ultimate goal is to win a championship, at any level,” said Natzke.

“This is huge. It’s an opportunity that has not come around for anyone since (Taupo’s) Ben Townley went to Europe for the first time in 2001 and he became MX2 world champion in 2004.

“It’s up to me to make this work. It’s a big investment on the part of my family, but we are looking for financial help. I’ll be gone for five months. The last race is late August and then I’ll come back to New Zealand between the seasons in Europe.”

With a solid financial backer, Natzke could become the latest Kiwi to return from Europe with a motorcycling world title.

Everts said he was thrilled to have Natzke in his line-up of young riders.

“We first saw him in the summer of 2014 and we could see he had good potential, even if he was not completely fit as a result of some injuries. New Zealand has produced some very good motocross riders and we’re looking forward to having him in the Junior Factory Team.”

Riders in the EMX 125 European Championship will race an eight-round competition beginning at Trentino, Arco di Trento in Italy on April 19 and concluding on August 30 in Assen, Netherlands at the end of August.