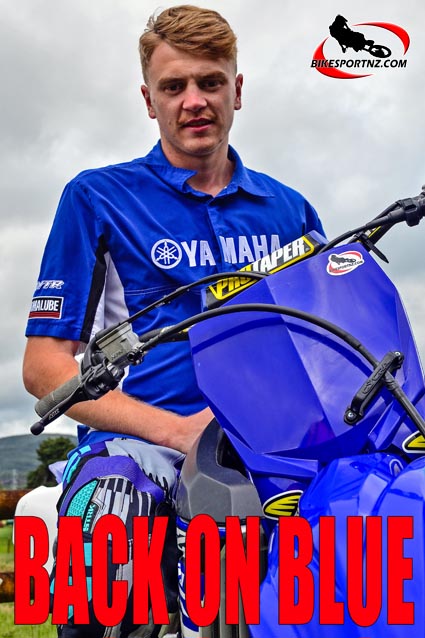 Mangakino’s Kayne Lamont is back in blue.

The current New Zealand MX2 (250cc) motocross champion will race Yamaha again after this week signing a contract that will see the 21-year-old defend his title in 2015 on the new Yamaha YZ250F four-stroke.

Lamont will race under his own management, although he will be receiving guidance from Altherm JCR Yamaha Racing Team boss Josh Coppins and will be “phased-in” to join the official factory team enclosure in 2016.

“We are thrilled to welcome Kayne back to Yamaha,” said former Grand Prix star Coppins, of Motueka.

“It has been my goal to get Kayne back on Yamaha for a year or two now and we have long-term plans for him. I really didn’t want to miss this opportunity to sign Kayne and now I will work very closely with him to develop him even further.

“We already have a full stable of great riders on the Altherm JCR Yamaha Racing Team for the coming season, so there just wasn’t room to have him under the awning just yet. But we will phase him in to be there in 2016.

“We have retained Australian Jay Wilson to come over and again ride the YZ250F in the MX2 class in the coming national championship season and we will also have young Australian Jacob Wright crossing the Tasman to join Queenstown’s Scott Columb in racing the YZ450F bike for us in the MX1 class,” said Coppins.

“It has always been my aim to develop Kiwi riders and, with Scott turning 31 now, Kayne will be a great rider for us going forward into the future.”

Waitakere’s Ethan Martens will also ride with Yamaha support, again contesting the MX1 class, although, like Lamont, he will be outside the Altherm JCR Yamaha enclosure.

“I won three national junior titles on Yamaha in the past, so it’s nice to be back with them,” said Lamont, who won the senior MX2 title last season racing a Husqvarna.

“I’m looking forward to getting out there and training on the new bike. Although I won the MX2 crown this season on a two-stroke, I actually prefer the four-stroke engine. It is a little more forgiving and easier on the body to ride a four-stroke,” Lamont said. “It has different power characteristics and easier to manoeuvre and turn sharply.

“The Auckland Motocross Championships in December will be my first race on the Yamaha,” he said.

“Obviously, my main aim this coming season is to defend my national title. I’m confident I can do that.”

Coppins will make a rare race appearance and ride the MX2 class at the MX Fest in Taupo over labour Weekend, “as a fill-in rider until Kayne is ready to race the bike for us”.