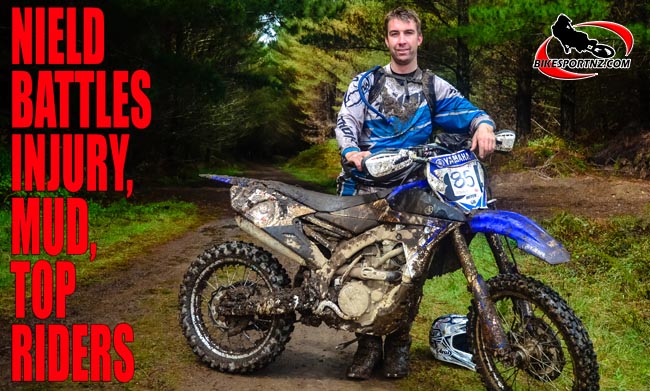 Bay of Islands motorcycle ace Mitchell Nield knows a thing or two about battling extreme elements, but his experiences on Saturday were probably some of the toughest he’s known in an off-road racing career stretching more than 20 years.

The 26-year-old Yamaha rider knew he was in for a brutal afternoon when the saw the organisers of the annual Suzuki Six-Hour Dirt Bike Challenge had altered the route just to get into the venue, “because vehicles would not be able to make it otherwise”, and, with rain steadily falling, Nield also knew it was also going to be very slippery on two wheels later in the day.

To make matters worse for Nield, he was still feeling the effects of a big crash he’d suffered the weekend before.

But Nield’s self-inflicted ordeal – and he’d still tell you it was fun – was destined not to last long.

Because of persistent rain overnight Friday and throughout the early morning on Saturday, the steep Ohakuri Forest course, about halfway between Tokoroa and Taupo, quickly became a greasy mess, eventually forcing the organisers to wave the chequered flag after just two-and-a-half hours, the race not even at half distance.

Nield was eventually declared ironman class winner – he was 11th overall and had completed three laps when the race was stopped.

“It was pretty tough going,” confirmed Nield afterwards. “I had taken pain killers for breakfast because of my crash last weekend. I was still pretty sore actually.

“I got a terrible start and was quite some ways back in the pack and just steadily worked my way past riders. I had no goggles after about five minutes and my face was getting filled in a bit with mud.

“I didn’t fall off once or get stuck anywhere. It was really just a matter of staying upright and lasting the distance.”

But the track gave way before Nield or his YZ250F bike did.

“The track just fell apart. There were a couple of big hills and plenty of riders stuck on them. But I enjoyed it and would have loved to have carried on.

“I have never won at this event in the past. It carries a lot of prestige, so I’ll be savouring this win.”

While most of the riders were having difficulties, it all seemed to go to plan for Yamaha pair Chris Power and Adam Reeves, who were announced as outright winners of the senior race after they were leading when the race was abandoned just after midday.

Nield is now preparing himself to tackle the big annual Roof of Africa extreme enduro event in Le Sotho in December.

“I expect conditions for that event will be entirely different,” said Nield. “It will be rock hard, steep and very physical. That’s why I wanted to ride this six-hour race, as part of my build-up.”