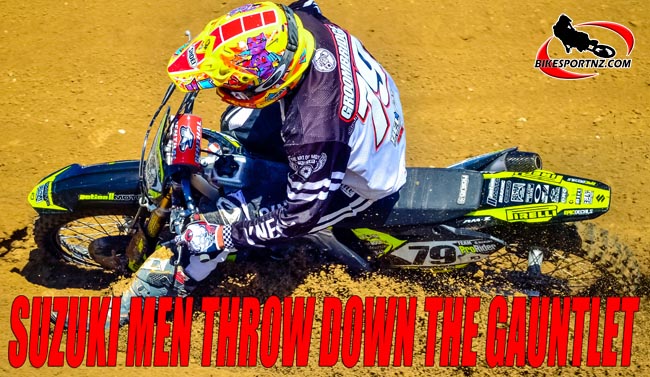 The Suzuki men are ready to throw down the gauntlet.

The new motocross season is about to burst into life and, behind the scenes, the Bel-Ray Pro Rider Suzuki Team has been very busy indeed, putting strategies in place to ensure they once again feature at the top of the sport in this country.

The Bel-Ray Pro Rider Suzuki Team will now mount a two-pronged attack on the MX1 class and have strengthened their claim for MX2 class honours as well.

Taupo’s national MX1 No.3 Brad Groombridge (main photo, above) returns to compete on the Suzuki RM-Z450 and, from the start of the 2014-15 season, which kicks off with the MX Fest at Taupo over Labour Weekend, he will be joined in the big bike class by former MX2 (250cc) frontrunner Rhys Carter. 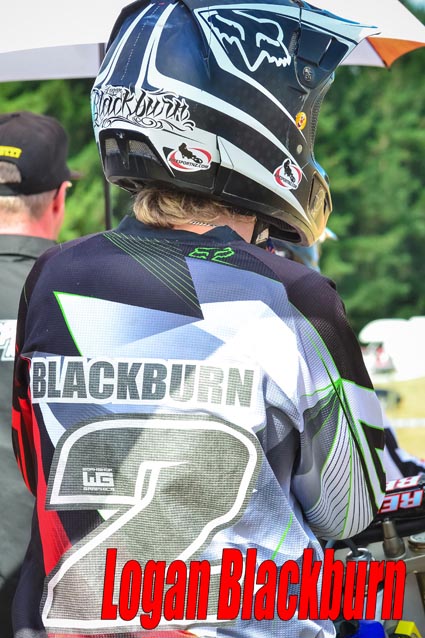 Mount Maunganui’s Carter stepped up from the Suzuki RM-Z250 to race in Australia earlier this season on the RM-Z450, so he is now well-attuned to the techniques required to handle extra weight and awesome horsepower of the bigger bike.

Carter first raced the RM-Z450 when he represented New Zealand at the Motocross of Nations in Germany last September and he also impressed this season with his MX1 class results across the Tasman and he will see it as a challenge now to try and match or perhaps even better his team-mate in the MX1 class at Taupo next month and at the nationals that follow in the New Year.

Dunedin’s Campbell King is also returning to the team’s enclosure and he will again battle for glory in the MX2 class, although the young man from Brighton will have a surprising new team-mate to share the spotlight – Te Puke’s Logan Blackburn.

With an impressive set of credentials to his name, national 125cc No.3 Blackburn switches to Suzuki with a point to prove as he steps up to pilot one of Suzuki’s potent 250cc four-stroke machines.

“I’m really looking forward to being a part of the Suzuki team and to racing the MX2 class,” said the 20-year-old Blackburn.

“I’ve very excited to be racing the RM-Z250. Andrew Hardisty (the team manager) has been awesome and, even before the deal was done and the season was due to start, he has been helping me a lot.

“I really want to start fresh and get some good results for him and the team,” said the BikesportNZ.com-backed rider.

The Bel-Ray Pro Rider Suzuki Team, which is based in Mount Maunganui, will also be a force to be reckoned with at the upcoming Whakatane Summercross on December 27-28 and also at the annual Woodville Motocross GP at the end of January.

But it is the New Zealand Motocross Championships, starting February, which will command most of their focus and, if some of the recent powerful performances by the team riders are any indicator, some of the key silverware could be heading across to the Suzuki enclosure this season.

“We are very excited by the coming season with what can be achieved aboard these very competitive Suzuki machines”, said team manager Andrew Hardisty, of Mount Maunganui.

“This season will be one of the most exciting ones yet for Team Suzuki. Suzuki has just launched a brand new 450cc motorcycle which we are very keen to use this season to expose its potential. As well as this, our MX2 riders will continue to develop and further showcase the brilliance of our 250cc bike.” 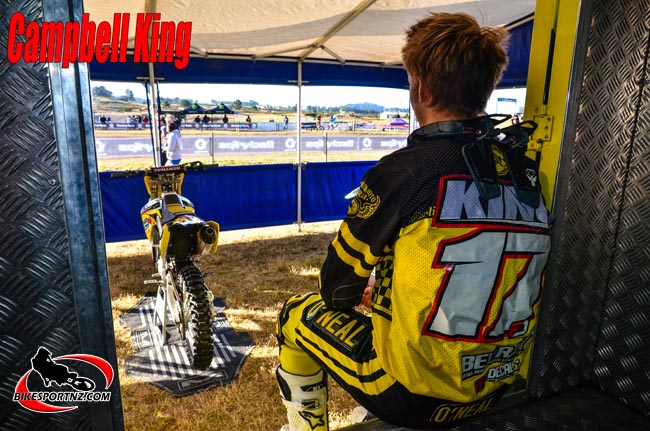