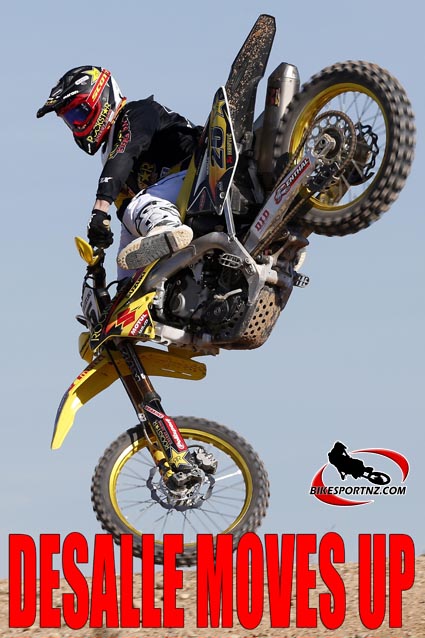 Belgium’s Clement Desalle and Dutch rider Jeffrey Herlings dominated their respective races to claim victory at the MXGP of Spain in perfect score style, both riders demonstrating at the weekend that they were back to their best form.

Suzuki rider Desalle took a stand at the weekend to prove he’s still a real player in this game. The Belgian looked more aggressive than he has of late, getting off to two great starts and going on to lead every lap from start to finish for his first ever FIM Motocross World Championship win in Spain, as well as his first perfect score of the season.

The podium almost wouldn’t look right without Yamaha’s Jeremy Van Horebeek as he makes himself the most consistent podium placer in the MXGP class this season.

“Today I had an awesome feeling, but my starts were not that good and that is where I lost it, but overall I am really happy, second on the podium to make it six times in a row, and I am really happy.”

Suzuki’s Kevin Strijbos fought hard from an average start in race one to take a hard fought fourth when he passed both current MXGP world champion Antonio Cairoli and Russia’s Evgeny Bobryshev with two-laps to go.

After making a change to his bike to help with the start in race two, the Belgian got the holeshot and rode solid to make the podium a complete Belgian domination for the second time this year.

The saying goes ‘Championships are not won on your good days, but on your bad days’, which can be said for KTM rider Cairoli as he looked uncharacteristically uncomfortable out on the roasted clay, but with fourth place being the result of a bad day, the Italian still has a lot to smile about as he continues to lead the championship by twenty-four points.

After having some big falls already this year like the one at Arco di Trento and then again two weeks ago in Valkenswaard, Kawasaki’s Steven Frossard is happy to have kept his KXF450 on two wheels this weekend to bring home a solid fifth.

For the majority of this season KTM rider Herlings has been claiming he’s lacking on-the-bike training and therefore is not as dominant as he has been in the past.

After the weekend’s performance on a surface which is the complete opposite end of the spectrum to the sand of Valkenswaard, it is almost safe to say “The Bullet” has been training hard and now he is back, and he means business.

“Today in the race we had some nice battles, it was really close for first to eight, but I am very happy to be back on the podium, three and three is good for me”

Meanwhile Kawasaki team-mate Arnaud Tonus did exactly what he needed to do here in race one, riding his own pace to take second.

In race two, the creativity of the Swiss was put to the ultimate test as he was forced to make new line combinations in order to make passes stick. After his plausible efforts in race two, where he scrapped his way into second only to lose it after going into a berm a little too hot and catching an edge which tipped him off his bike, he still managed to come home for fifth which landed him on the podium for the fourth time this year.

Persistent is one word that sums up Husqvarna’s Romain Febvre. The young French star on the rise fought tooth and nail at the weekend, which left him face first in the dirt a couple of times. Nevertheless the youngsters never give up attitude kept him moving forward which rewarded him with fourth overall for the Grand Prix of Spain.

KTM’s Jordi Tixier can’t get the monkey off his back this year. While the Frenchman had moments of greatness where he looked at home and on the move around the hilly circuit here in Talavera, a few costly mistakes forced him backwards in both races leaving him in fifth overall.

It was heartbreak for KTM’s local kid Jose Butrón after he caused a thirty-five minute fence line fiesta when he snapped up the holeshot and led the best part of race two. After throwing his heart on the table to bring a podium home for his frenzy of screaming fans, the Spaniard appeared to have second place already in his pocket when he made an error over the back of the track and dropped back to sixth with a gut wrenching quarter of a lap to go.

Also making his MX2 Grand Prix comeback, Yamaha’s Christophe Charlier, who qualified an outstanding third place on Saturday, crashed twice in race one and only managed to salvage 12th, but bounced back strong in race two to come home in eighth. Although the return from injury could have been better, Charlier is satisfied with his results and progress from Sunday, and is now looking forward to the next round of MXGP in two weeks’ time.