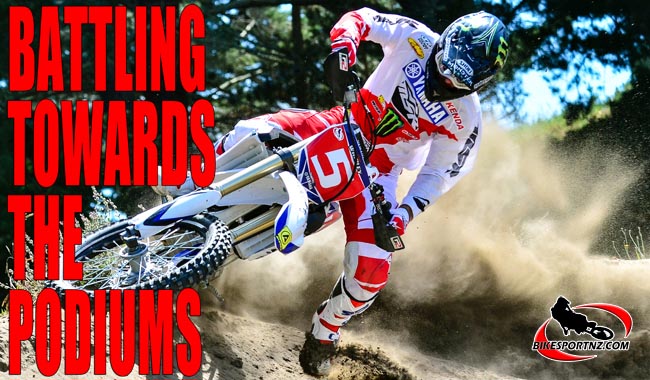 Kiwi motorcycle heroes Paul Whibley and Callan May are determined to thrust themselves onto the podium in the United States and it’s probably just a matter of time before they get there.

After the fourth of 13 rounds in the series, the two athletes were both in solid positions, Whibley fifth in his class standings and May sixth overall in smaller bike division, and so it was with a positive attitude that the two men arrived at the fifth round of the series, at Springville, Indiana, at the weekend.

Whibley kicked off the afternoon by snatching the holeshot and was immediately locked in a handlebar-bashing duel with American Steward Baylor on the opening lap. However, defending 2013 champion Kailub Russell quickly moved to the lead position with Whibley, Charlie Mullins, Baylor, Thad DuVall and Whibley’s Yamaha team-mate Jordan Ashburn close behind.

Whibley maintained third place position for most of the race but the two-time GNCC National Champion fell back a couple spots near the end, finishing fourth in the XC1 Pro class and fifth overall for the day, just behind Yamaha’s XC2 class winner Ricky Russell.

“My pace was a little slow after a crash in practice left me with chest pain,” said Whibley.

“I wasn’t even sure I was going to race with breathing and sneezing being particularly difficult leading up to the race. Once on the bike and some adrenaline started to flow, I found I was able to ride relatively pain free as long as no mistakes or sudden dabs were taken.

“I was soon passed by a few riders and settled into about 5th. I found I could ride this pace comfortably and not risk any further injury. That was until Japanese rider Takashi Koikeda passed me and sparked my inner desire to race. My pace soon increased and I found myself retaking the position from Takashi and also my team-mate Jordan Ashburn, who had passed me on lap one.

“I rode most of the race in third place till late in the lap when I slowed again, and Kailub Russell took the position. I think the adrenaline had started to wear off. In the end, it was a solid finish from a race that I wasn’t sure I would see the chequered flag.”

May, meanwhile, had managed to push through to finish the three-hour race 21st overall, seventh best of the XC2 class riders in the pack.

“I was pretty happy to fill in on team ‪MCS Racing at the weekend and finally getting to ride a new ‪Yamaha YZ250F,” said May.

“With minimal testing during the week to get it set up, I was happy to come away with seventh overall in XC2. The track was pretty tough with lots of rocks and roots.

“I battled with arm pump on the first two laps but managed to shake it off. I want to say a huge thanks to the team for getting the bike race ready and everyone out there helping.”