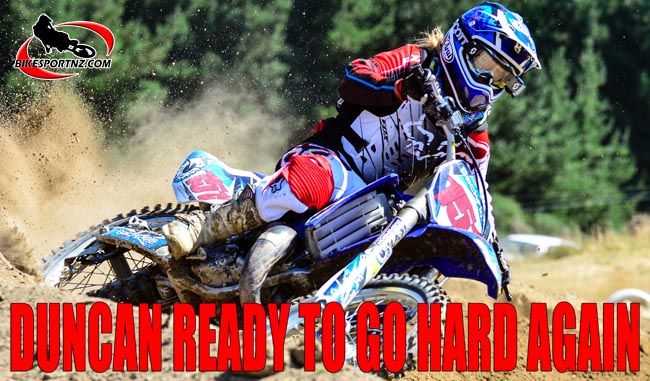 Otago’s Courtney Duncan has been notable for her absence from the New Zealand motocross scene for nearly all of the past 12 months.

After spending most of the year sidelined with an injury sustained while racing in the United States, the Yamaha heroine has been out of the racing spotlight that she typically hogs when she is 100 percent fit and fast.

Duncan won the day in the 125cc class at the opening round of the New Zealand Motocross Championships near Timaru last season, although she never gave herself a chance of becoming senior national 125cc champion in 2013 because she was targeting even bigger and bolder goals.

She had always planned to abandon the Kiwi nationals just prior to round two, so that she could instead head overseas and fulfill her lifelong dream to win in the US.

Duncan immediately stunned the American motocross community with her performances, winning both her women’s class races at the opening round of the US nationals Sacramento, California, in May, but then broke her wrist before round two of the US women’s nationals in early June, sidelining her for several weeks.

Many months have passed, but now the 18-year-old will again roll her beloved Yamaha YZ125 to the start-line almost a year to the day since she last raced, and won, on New Zealand soil.

Before getting the thumbs-up to race again, Duncan had to play “the waiting game, which sucked,” she said.

She had to be clear of the dizziness which plagued her training sessions in the gym.

But the waiting is now over.

“The head is back to normal now and I am really excited to be back on the bike. Put it this way, I’m more than 90 percent ready (to take on the boys).

“I’ve only been back on a bike this past month or so and I honestly don’t know how I’ll go this weekend, or even if I’ll be on the pace.

Duncan thanks her family and friends who stood behind her, supporting her fight for recovery and she says she is now ready to take on the boys and tackle the four-round national series.

Yamaha New Zealand has supplied her a YZ125 and, although she believes she may not be at her peak, she will no doubt still give a good account of herself on Saturday.

“I’m just going to do the best that I can. Obviously I’m going to give it everything I’ve got.”

The young man who went on to win the New Zealand senior 125cc crown last season, Rotorua Yamaha ace Cameron Vaughan, has since moved on to the MX2 (250cc) class, but last season’s runner-up, Te Puke Yamaha rider Logan Blackburn will be at Timaru with plans to win the title this season.

Perhaps Duncan will be the spanner in the works for Blackburn. It will all become clear by late on Saturday afternoon.