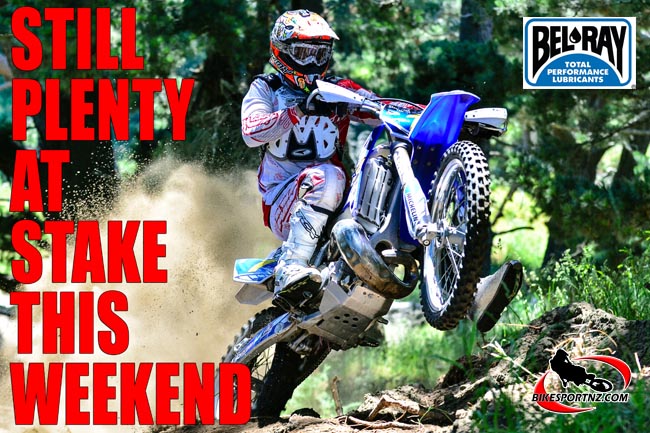 Mokau’s Adrian Smith is taking nothing for granted because, despite the national cross-country champion’s dominance, the pressure is still on.

The Yamaha ace may have been unbeaten in the Bel-Ray Cross-country Championships so far this season, but he’s not resting on his laurels as he heads into battle at round three of the competition in the Waikato region this weekend.

Smith is well aware that any little slip-up now could hand the initiative to his arch rival, Raglan’s Jason Dickey.

The series is at the halfway stage with just two rounds remaining, but points are to be counted from only three of the series’ four rounds.

Riders will discard their worst result and if Dickey wins the remaining two rounds, he will take the trophy on a count-back – the two foes would be level on points but Dickey would have won the most recent race – a classic illustration of the old saying “you’re only as good as your last race”.

That would be entirely unresolved, of course, if Smith heads Dickey to the chequered flag on Sunday.

It must be remembered, too, that the Bel Ray series is about more than just these two riders with hundreds of equally-talented riders expected to flock to the farmland course near Cambridge, the event this weekend jointly run by both the Huntly and Cambridge motorcycle clubs, as part of a new initiative from Motorcycling New Zealand.

In addition to Kawasaki rider Dickey, there are at least a dozen riders who could be expected to threaten national No.1 Smith when the shotgun blast sends the riders on their way on Sunday afternoon.

Hamilton’s Andrew Charleston, Morrinsville’s Nathan Tesselaar and Tuakau’s Boyd Carlson are just three of the many high-profile riders who are each capable of winning on Sunday.

Meanwhile, in the 90-minute junior race, to be staged earlier in the day, Te Kuiti’s Sean Kelly will be looking for revenge over Pukekawa’s Isaac Clark.

Kelly won the series opener in December but Clark stole the glory at round two last month and it may go down to the wore between these two riders on Sunday, although Raglan’s Jaan Anderson, Auckland’s Jake Wightman, Taupiri’s Andrew Barr and Gisborne’s Duncan Summerfield may have an influence here too.

A wide range of classes are catered for and this allows competitors to make their way up through the grades as their riding improves, with a good chance of collecting a prize or two along the way. The experts’ class has always attracted New Zealand’s top talent with many Kiwi internationals competing while at home during their international off-season.

The 90-minute junior race starts at 10am and the two-hour senior race blasts off at about midday. Mini bike riders will run a race on a separate, extended motocross track, starting at 10am.

It is going to be a busy time for Smith, and the other riders too, with at least two major competitions overlapping – the fourth and final round of the Bel Ray series is set for March 8 but, before that final showdown, Smith will begin his national championship title defence in the Taranaki region.

The four-round New Zealand Cross-country Championships begin on steep farmland at Purangi, near Stratford, on February 16, with rounds to follow in Huntly, Westland and Marlborough.