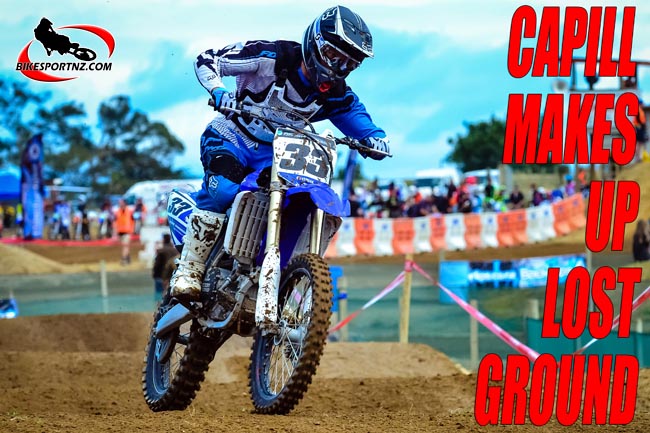 Bay of Plenty’s Darren Capill has a bit of catching up to do and he’s not wasting any time doing it.

The Whakatane Yamaha dealership manager was absent from the opening round of the New Zealand Motocross Championships near Timaru just over a fortnight ago – because of work commitments – but he more than made up for that no-show with his performance at round two at Tokoroa on Sunday.

The 45-year-old took his Ocean Yamaha YZ450F to finish 3-1-1 at Tokoroa on Sunday, comfortably winning the MX3 class on Sunday from fellow Yamaha ace Chris Power, who managed 2-4-2 results, while Napier’s Rhys Wheatley (Honda) chimed in with 1-11-6 results to take the third step on the day’s podium.

Power’s achievement was possibly even more significant because he was racing a Yamaha WR450F enduro machine, complete with lights, after he had just raced the same bike to finish fourth overall in the Expert Grade at round one of the New Zealand Enduro Championships near Whangamata.

Unfortunately for both the leading Yamaha riders, their non-appearance at round one has cost them dearly in the championship standings and Capill finds himself seventh overall after the two rounds, while Power is down in ninth position.

With the remaining two rounds in the North Island – at Pukekohe in just over a week’s time and at Taupo on March 22 – that offers the tantalising prospect that they will be able to rapidly move up the rankings.

“I started the day a bit slow … I only qualified fifth fastest,” said Capill.

“And then I had a miserable first race after I blew the start. Still, I’m happy I managed to catch up and finish third.

“Then I won the next two races, so that was a solid way to end the day.

“My fitness is probably not what it could be. I only rode the New Zealand Motocross Grand Prix at Woodville four weeks ago (where he finished equal runner-up to Hamilton Yamaha ace Darryll King in the veterans’ class) and I have not done anything on the bike since then.

“I have been swimming and running, so my cardio fitness is okay, but I need more bike time. I got that today,” he laughed.

“I may have to skip the Pukekohe round of the nationals because of work, but I will definitely ride the final round at Taupo. I’m looking forward to that. I always go well at Taupo.”