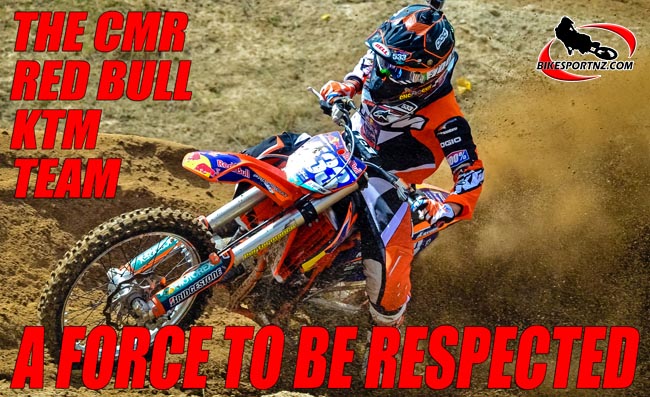 The CMR Red Bull KTM Motocross Team always makes an impact whenever it shows up to race, but the force inflicted by the men in orange was simply outstanding in Tokoroa at the weekend.

The CMR Red Bull KTM team riders all advanced their causes at second round of four in the New Zealand Motocross Championships in the South Waikato town on Sunday.

Hamilton’s Josiah Natzke arrived at Tokoroa just one point behind last season’s national No.2 Logan Blackburn (Altherm JCR Yamaha YZ125) in the 125cc class, but, by the end of the day, Natzke had surged into the lead and amassed an impressive 20-point advantage in the championship chase.

What was even more impressive was that it had suddenly become a CMR Red Bull KTM 1-2 at the top of the 125cc standings as Hadleigh Knight, from Atiamuri, also came on strong at Tokoroa and climbed up from fifth to second spot in the rankings, while Blackburn slipped down to third position, 15 points below Knight.

Natzke, only 15 years old and fresh out of the junior ranks, finished 1-2-1 to win the day, while Knight chimed in with 3-1-2 results, as the two CMR Red Bull KTM riders completely dominating the 125cc division on Sunday.

“It was really a game of survival out there,” said the surprisingly-mature Natzke (pictured above).

“Everyone was getting eaten alive by the bumps and soft berms. I even had a few bobbles, but, thankfully, nothing too major.

“Once I saw that Logan (Blackburn) had crashed in the third race, I just concentrated on finishing safe.”

While that performance was impressive enough, more was to come from the CMR Red Bull KTM team in the MX2 (250cc) class, where Dargaville’s Hamish Dobbyn threw down the challenge to class leader Kayne Lamont (Husqvarna Red Bull WIL Sport BikesportNZ.com TC250), of Mangakino.

Lamont won the day and extended his championship lead but Dobbyn hounded him all the way, finishing second and fifth early in the day, before clicking into a higher gear and winning the final MX2 race of the afternoon.

That result was enough to elevate Dobbyn from fourth after round one to now sit comfortably second in the standings, albeit 27 points behind Lamont and only two ahead of defending national MX2 champion Scott Columb (Altherm JCR Yamaha YZ250), from Queenstown.

Fellow CMR Red Bull KTM rider Hamish Harwood, fresh from winning the Australian Under-19 motocross title in 2013, joined the party with 7-4-3 results and he has also moved up the championship table, from sixth after round one to now be fifth in the rankings, just behind Australian visitor Jay Wilson (Altherm JCR Yamaha YZ250F) and defending national champion Columb.

If momentum favours the CMR Red Bull team riders, then the podiums at the next round of the series, at Pukekohe in a fortnight, could again be painted bright orange.

Australian visitors Ford Dale and Kirk Gibbs had difficulty with the “talcum-powder” consistency of the circuit and are now third and fifth overall respectively in the MX1 class, with defending MX1 champion Cody Cooper (The Honda Shop Racing Team CRF450) and Scotsman Billy MacKenzie (Altherm JCR Yamaha YZ450F) in the top two positions after round two.