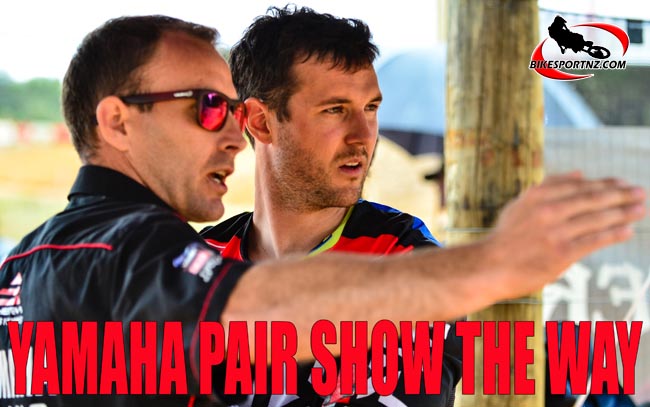 Queenstown’s Scott Columb is getting the best possible assistance from his boss as he warms up for the summer motocross season ahead.

It comes as no surprise to the 30-year-old national MX2 motocross champion that his Altherm JCR Yamaha Racing Team manager, former Grand Prix star Josh Coppins, has been passing on tactics and tips to his rider, but the ‘help’ stepped up to an entirely new level at the weekend when Coppins dusted off his helmet and boots to head out onto the race track with Columb.

It was a rare outing for the recently-retired Coppins, but the chance to race at the relatively low-key Otago Motocross Championships was too good an opportunity for the 36-year-old Motueka father-of-three to pass up.

The two-day event proved to be a whitewash for the Altherm JCR Yamaha Racing Team pair, Coppins taking the team’s Yamaha YZ450F to win all six MX1 class races over the weekend, while Columb rode his YZ250 two-stroke to runner-up spot each time.

“It wasn’t really about Yamaha celebrating a 1-2 result at this event,” said Coppins. “It was just a great opportunity for me to get out there and show a few people that I can still ride, that I can do as well as talk.

“I had run a couple of training schools for the kids during the week and I guess it was nice to be able to demonstrate that I know what I was talking about,” he laughed.

“It was a fast track and really suited my 450cc bike better than Scott’s 250, but I still had a fight on my hands to beat Scotty.

“It was n ice to be back on a bike and I’ve done a fairly decent amount of riding lately, so it felt good, although I did feel quite tired afterwards.

“It was a great training exercise for Scotty too and I was able to spot a few areas that I can help Scotty to improve.

“Scotty is gearing up now to tackle the Whakatane Summercross (on December 28 and 29) and we are getting the bikes sorted for that.

“I don’t intend to race much at all these days, but I will contest the Nelson Street Races on January 2, riding in the super moto class. But I have no more motocross races planned for the time being.”