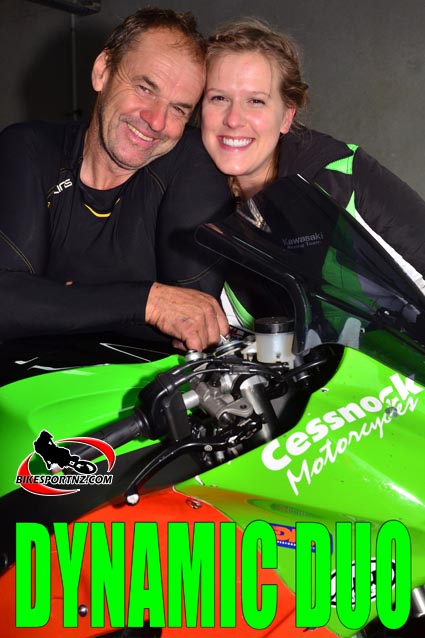 The man from Cessnock, in New South Wales, made a name for himself by winning the famous Finke Desert Race on three memorable occasions – in 1981, 1982 and 1985 – as well as featuring among the top 10 for every one of his 22 attempts.

But now the Australian cross-country endurance racer is trying out an entirely different motorcycling code and, what’s more, he’s sharing the new passion for asphalt and superbikes with his daughter Sophie.

It’s a late-career move for the 56-year-old Phil Lovett to switch from desert to tarmac, but it is one he’s savouring even more than expected because it is also a great opportunity for him to “enjoy a little bonding” with his 23-year-old daughter.

The two racers have arrived with their Kawasaki ZX-10R superbikes to race in New Zealand’s popular Suzuki Series this season.

The first round was at Hampton Downs last weekend, where they suffered mixed results because of issues with their tyres on the damp track, but there is no time to dwell on that with the next round coming up quickly, at Manfeild this Sunday.

The third and final round is set for the famous Cemetery Circuit public street race meeting in Wanganui on Boxing Day.

“We did a little super moto racing together first, just for Sophie to get her confidence up,” said Phil. “Then we hired a road bike and she really enjoyed that. Now we’re racing them.”

Sophie is an environmental planner and recently earned an 18-month contract to work in New Zealand, based in Auckland, and that’s where the idea was born to come over and race the Suzuki Tri Series. They will also race the four-round New Zealand Superbike Championships, which kick off in the South Island in January.

“She’s a fairly competent road racer and being in the same races as my daughter is not something I really think about. If I saw her lying beside the track, I would obviously be concerned, but I’m usually just too busy concentrating on my own racing.

“It’s great being able to share the experience with Sophie. In my younger days I was working seven days a week, and racing a fair bit too, so having a family life was difficult. Being able to bond with her now is great.

“This is an entirely new sport for me and has given me a whole new lease on life. Normally, at this time of the year, I go jet skiing, but I’m enjoying the racing in New Zealand and we’re already talking about coming back next season too.

“Kawasaki in New Zealand has helped us out with getting bikes over here, but we don’t really know anything about the circuits yet. Race day is the first time we will have seen the tracks.”

But, as the summer progresses and their experience with the Kiwi tracks grows, expect to hear more about this father and daughter duo from across the Tasman.

Meanwhile, it is fellow Kawasaki ZX-10R rider Nick Cole, from Hamilton, who leads the superbike class standings after Hampton Downs’ opening round last weekend and he heads to Manfeild determined to keep intact his advantage.