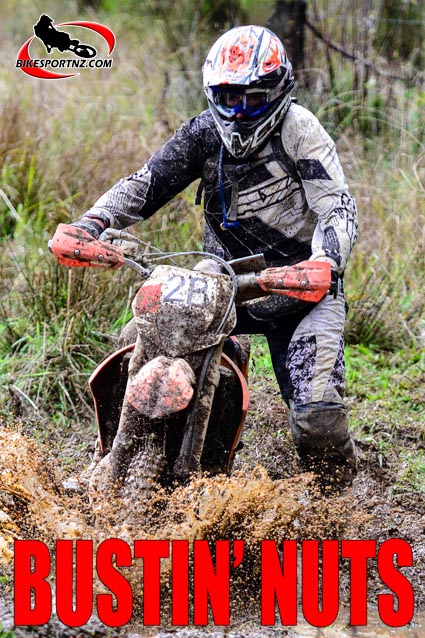 Tokoroa motorcycling legend Sean Clarke and KTM New Zealand have again joined forces this season to take the sport of off-road bike racing to the extreme.

The famous Nut Buster Hard Enduro kicks off this year’s KTM Extreme Enduro Series in North Canterbury on Saturday, September 28, an event that is sure to stretch nerves, muscles and sinews to breaking point.

And there will be no let-up for riders because the four rounds that follow are expected to be equally as tough and energy-sapping, particularly the two-day No Way In Hell enduro that will wrap it all up in April.

The series has been ‘super-sized’ this year, boosted from four to five separate events and it kicks off at a place called Woodstock Heights, in North Canterbury, where it is expected to draw many of the country’s elite off-road racers, from as far as Hokianga in the north to Invercargill in the south.

With the event having grown in stature every year since its inception in 2010, the event this year is again expected to attract a slew of Kiwi internationals from across the entire spectrum of dirt bike racing – from the motocross, moto trials, enduro and cross-country codes.

New Zealand already has several popular and well-established extreme enduro events on the racing calendar, but now Clarke and the KTM motorcycle company have bound them together to create a super competition.

The five major extreme enduro events on the calendar will remain stand-alone events, if that is how riders want to treat them, perhaps picking and choosing which events suit their individual schedules, but Clarke is also bringing them together to form a KTM Extreme Enduro Series, with a special prize to the one outright winner in each bike class.

“Points will be awarded in each round across four different grades – pro, expert, ladies and clubman.

“At the series final, the two-day No Way In Hell extreme enduro (on April 20 and 21), the riders with the best tally from any four of the events will take home the trophy and the bragging rights,” said Clarke.

“All the No.1 riders from all the motorcycling codes will likely come together for this.

North Island riders Mitchell Neild, from the Bay of Islands, Mike Skinner, from Auckland, and South Waikato’s Clarke ensured their journey south was particularly worthwhile last year as they battled for the main honours on the day.

Riders were set off in groups of four at 30-second intervals and it was Nield who took the early initiative, with Clarke (pictured above), Skinner and a flying Greg Delautour, from Taupo, soon fighting for the lead.

Delautour executed a pass on Nield to snatch the lead on lap two, but a broken arm just a lap later ended Delautour’s day early.

The opening round of this season’s Value Cars-sponsored series is set for Trig Rd, Woodstock, North Canterbury and will be signposted from West Oxford and the Waimakariri Gorge Bridge.