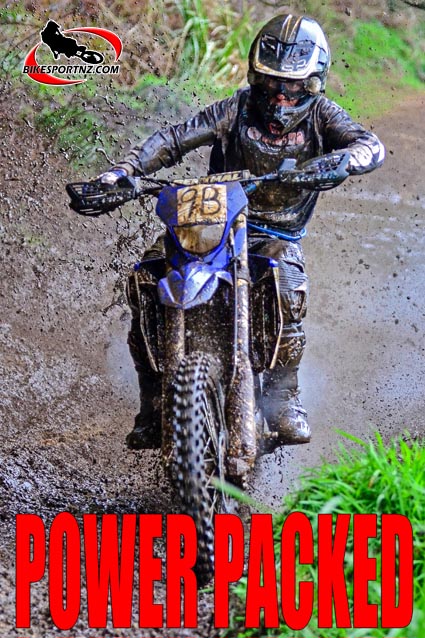 Auckland’s Callan May has hit a rich vein of form and his motorcycling rivals should take note.

The 21-year-old Yamaha ace has been going from strength to strength in his chosen sport of off-road motorcycle racing and his overall runner-up finish at the sixth and final round of the Yamaha New Zealand Enduro Championships series near Tokoroa on Saturday was easily enough for him to surge up to No.3 in the national rankings.

May began his weekend with the under-300cc four-stroke class title already in his grasp after another strong performance at the penultimate round of the series near Huntly in June, so his new focus at the weekend was to try and improve his position in the ‘overall’ stakes.

May (Kiwi Rider BikesportNZ.com Yamaha YZ250F) started the day fourth overall in the championships and, after spending the day nipping hard on the heels of the eventual winner, Auckland’s Chris Birch (Red Bull KTM 350 XCF), and ahead of Palmerston North Yamaha ace Adam Reeves (Sargent Motorcycles BikesportNZ.com YZ450F), May was able to move up to finish the series third overall, behind outright championship winner Birch and 2012 champion Adrian Smith, of Mokau.

He was on the pace and running with the leading bunch when his bike’s drive chain came off and mangled itself around his rear sprocket, forcing him out of the event.

“It was a disappointing way to finish the series but at least I still finished the championship runner-up overall and I won my over-200cc two-stroke class title as well.”

But, for May, his runner-up finish on Saturday, his best result of the season, was definitely a positive note on which to end the series.

“It was a really tough day,” said the Titirangi electrician. “Right from the start I had to put the hammer down and ride aggressively but I’m pretty happy with how it all turned out.

“I’m thrilled to win my class at this last round too.”

May rode a Yamaha YZ125 to win the national under-200cc two-stroke crown last season, but stepped up to the bigger Yamaha YZ250F this year, quickly proving he is just as adept on that bike.

The next big event for May is the big annual Suzuki Six-Hour Dirt Bike Challenge near Tokoroa on October 5.

For that event he will team up with Smith to co-ride May’s Yamaha YZ250F.