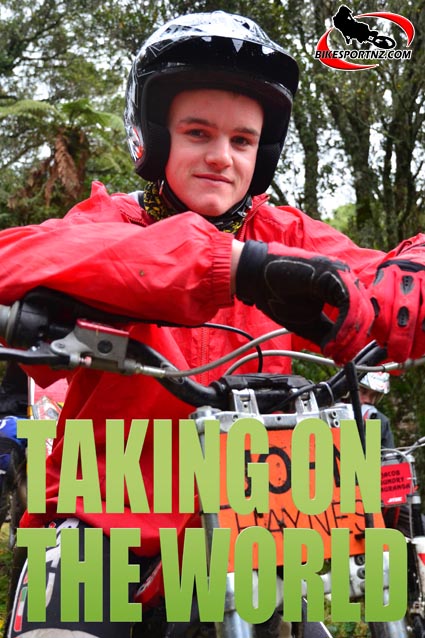 It has been 10 years since New Zealand last sent a team to contest the Olympics of Moto Trials, the Trial Des Nations.

This week it is time to do battle again with two Kiwi teams in contention in a small village of Le Châtre, central France.

For the first time ever New Zealand will be sending a two-rider women’s team – Stefanie Downs from Christchurch and Gabby Gundry from Tauranga – to compete against 11 other countries in the women’s section.

This will be the first time either women have travelled and competed in Europe and both will be thrown directly into the heat of it with two separate events in as many days.

Downs will have a slight advantage over Gundry as she is competing the weekend prior at another World Championship event also in France and will hopefully bring new found confidence for the Des Nations. Friday they will both contest the final round of the FIM Womens’ World Trials Championship as individuals before lining up on Saturday for the main team’s event.

They will however be at a disadvantage during the teams event as most of the other countries will be contesting three riders per team where the best two scores of each section count towards the their overall points. This will place a lot more pressure on our girls to make sure every attempt counts.

In the men’s event held on the Sunday there are a total of 24 countries taking part with the top 5 professional Nations competing in the elite Group A Class while the remaining 19 Nations fight for Group B honours. NZ has held a best placing of 5th in Group B back in 1997 and this year we are fielding a younger less experienced development team.

New Zealand’s aim for this year is to make the top 10 Nations in Group B.

As it is with the women, the lowest score from each section does not count so the best three attempts count for overall points.

Laugesen also acting as team manager is the veteran of the team having competed for NZ three times previously at other Des Nations events and will put all of his experience into practice to provide a good base score for the team to build on.

Fox could be the team’s big surprise as he has spent the past four months based in Spain. Riding full time and contesting all European legs of the FIM Youth Trial World Championship he has gained valuable experience, scoring championship points and honing his skills to ensure he will be a force to reckon with in the future.

Haynes will also have a point to prove as he tasted success last year finishing as the best Australasian Youth rider at the 2012 World championship held in Bendigo, Victoria, and will not be wanting Fox to get to far ahead of him. Matt Foster is a top class bike trial exponent and will be utilising all his skills to conquer the French sections including the man made section in the centre of town which is the crowd favourite.

Joining the teams in the vital role of a minder or assistant will be Gavin Fox, Blake’s father, who has spent a part of the year already in Europe helping his son. And also the team are lucky to have the experience of Nick Ball, Wellington as a minder who has helped multi time NZ and Australian Champ Jake Whitaker gain many of his titles in the past.

The team wishes to thank Motorcycling New Zealand for making it possible to get us back on the world stage, everyone who has contributed to the “Give a little” page and the trials community of NZ for their support.