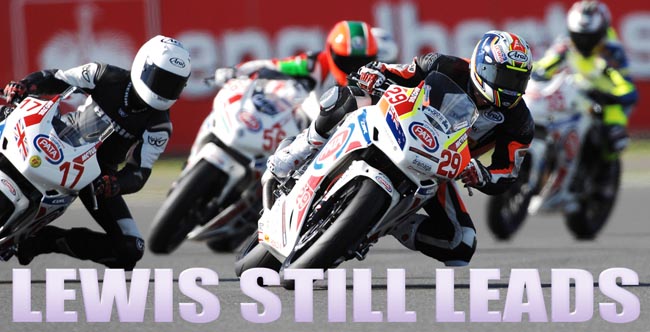 Flying Kiwi Jake Lewis is still the points leader after the latest round of the European Junior Cup at Germany’s Nurburgring at the weekend, but his advantage has been significantly shaved back.

The young man from Rangiora qualified fastest but had to settle for only sixth place in the race proper at the weekend and, instead of being 10 points in front, he is now just four points clear at the top, ahead of Frenchman Robin Anne.

“Unfortunately I got swamped by another four riders down the straight and could not do anything in the final corners to get them back,” Lewis explained.

“Still sixth is a good points position for the championship and I am still leading the standings by four points.”

After a delay of over an hour, the sixth round of eight in the PATA European Junior Cup eventually got underway and lived up to expectation by providing yet another thrilling climax to a race that nobody could predict the winner as the race entered its final lap.

Pole-setter Lewis was in confident mood and led at the end of lap one from Italian Kevin Manfredi.

Italy’s Michael Canducci crashed on lap two, leaving a breakaway of five riders at the front.

Lewis continued to lead while behind him positions were changing at almost every turn.

Guillaume Raymond (France) showed his hand at the start of lap four but Lewis responded instantly. Agusto Fernandez (Spain) then hit the front but again Lewis reacted and reclaimed the lead half way around the lap.

With one lap to go the leading group was now 9 riders all covered by less than half a second.

Fernandez and Hungarian Richard Bodis crashed out at turn one leaving seven to battle for the podium.

As the gaggle reached the final straight they were line astern with nobody seemingly wanting to lead and as the riders entered the final corner it was Bo Bendsneijder (Netherlands), who was making his second wildcard appearance in the series who took the lead, holding a slender advantage to claim his 2nd win of the year.

Manfredi held on to second while Anne took his chance on the run into the line to grab the final podium spot.

Fourth was Britain’s Josh Harland who produced his best ride of the year, marginally ahead of compatriot James Flitcroft in 5th.

Championship leader Lewis had to be content with 6th after being pushed wide on the run in to the flag, the Kiwi holding on to his championship lead albeit by a reduced margin.

Seventh eventually went to Spaniard Javier Orellana who rode superbly from the back of the grid. Eighth was Adrian Pittet (Switzerland) who got the better of Estonian Hannes Soomer and Stinius Odegard (Norway) who grabbed his first top ten finish of the season.

Local rider Marcel Schultheiss was an impressive 12th as Guillaume Raymond picked up a 20-second penalty and was eventually classified 13th.

Magny-Cours in France will be the setting for the penultimate round of the PATA European Junior Cup powered by Honda in five weeks’ time.