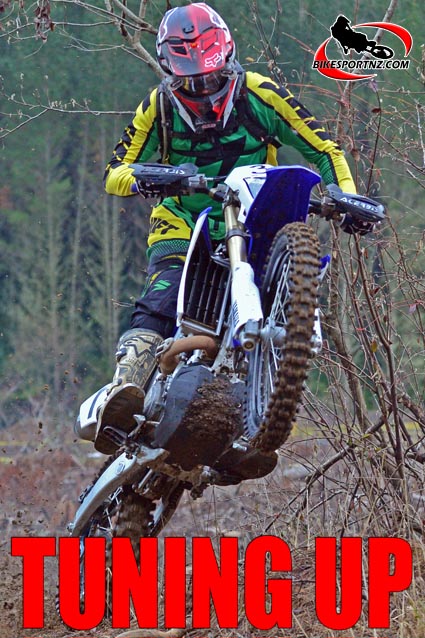 Win or lose on Sunday, Auckland’s Chris Power really only has one thing on his mind – “to get things humming”.

The Yamaha Central Enduro Series wraps up with the fourth and final round on steep forestry land off the Moonshine Road, near Pauatahanui, on the Kapiti Coast, this Sunday and Power will be using this outing as a means to an end.

The North Shore rider wants to get his brand new Yamaha WR450F set up and run-in ahead of his real focus, to win the sixth and final round of the Yamaha New Zealand Enduro Championships near Tokoroa in just over two weeks’ time (on September 21).

“I did not ride this event last year but I want to get a bit of riding done before the final round of the nationals. I really want to finish strongly at Tokoroa,” said Power, the national over-300cc four-stroke class enduro champion last season.

“I am running third overall in the over-300cc four-stroke class after five rounds so far this year. I don’t believe I’m in a position to win that title again, but I will be fighting to finish better than third,” said the 32-year-old.

“I also have to build up for the big Suzuki Six-Hour Dirt Bike Challenge that’s coming up (near Taupo on October 5). For that race I will team up again with Palmerston North’s Adam Reeves.

“We’ll certainly be fancying our chances of winning that race.”

Power is obviously no stranger to long-distance endurance racing – he and fellow Aucklander Callan May teamed up to win the big annual Castrol Six-Hour dirt bike marathon at Matata, near Whakatane, in May.

This Sunday, the riders will be set off in intervals from the Moonshine motocross facility, the same venue that was used for the national enduro championships round held there in April.

In the battle for overall honours in the intermediate class, Lower Hutt’s Mike Welsby is leading the charge.

Eketahuna’s Charlie Richardson and Stratford’s Josh Hunger are battling it out for the junior honours overall, so there is still plenty to aim for.

“There is always a mixed bag of riders at events such as this and the track conditions are always a factor too,” said Power.

“I think it’s been raining down there and it could be quite slippery under the bike’s wheels. It should be a tough one, but the tougher the better, as far as I’m concerned.”