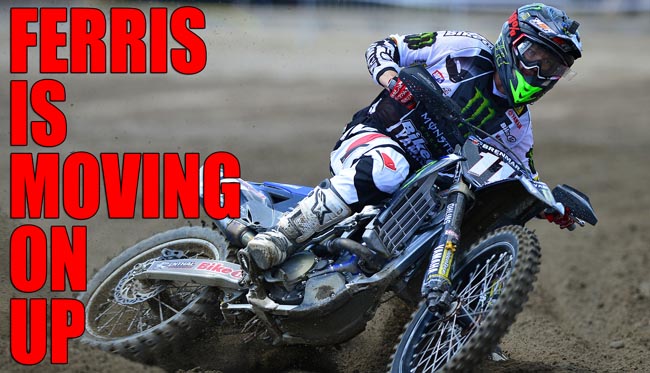 Australian Dean Ferris will race a YZ450F class for Yamaha in the Motocross World Championships next season.

The 2013 MX2 Grand Prix of Belgium winner will step into the premier MXGP category (formerly MX1) to race the 2014 YZ450F for the Steve Dixon-led Yamaha team next season.

A contract between the Australian and the Brits for the 18-race series beginning next March was signed and confirmed on Sunday after the Benelux round at Lierop.

Ferris had a successful first Grand Prix term with Yamaha, scoring four podium finishes – the first at the championship opener in Qatar – and sealing victory in damp conditions at Bastogne last month.

He lifted silverware in Portugal and Finland, raced to two podium positions and was just one of three GP winners in 2013. The 23 year old ended the campaign with three chequered flags from the last six motos and with 6th in the overall MX2 standings.

“It’s good to be with the team and Yamaha for another year. I feel settled with Steve and the guys and we had a pretty good season in MX2,” commented Ferris on the phone from Yamaha Motor Europe where he was picking up a ’14 YZ450F for the first time.

“I actually think I am a better 450 rider and it was always my intention to be racing Grands Prix in MX1 so I’m happy that we got everything sorted. I’ll be out on the bike as soon as possible to see how the new bike feels and then I reckon we’ll be testing already from next week. Can’t wait.”

“We are very pleased to continue with Dean next year and expanding our activities into ‘MXGP’ which will be important for our sponsors and partners,” said Dixon, who will also field Max Anstie in the MX2 division. “I’m not concerned about having two riders in two classes, chiefly because the 2014 YZ250F and YZ450 motorcycles now have such a close and beneficial structure, and concept behind them. It will be exciting and even though we have just closed 2013 there is plenty to look forward to already for the winter and 2014.”

Ferris’ duties on the YZ250F are not yet finished. He will wear number 29 for his country at the 67th Motocross of Nations at Teutschenthal in Germany on September 29 as the Aussies chase their second ever podium result in the high profile annual event.