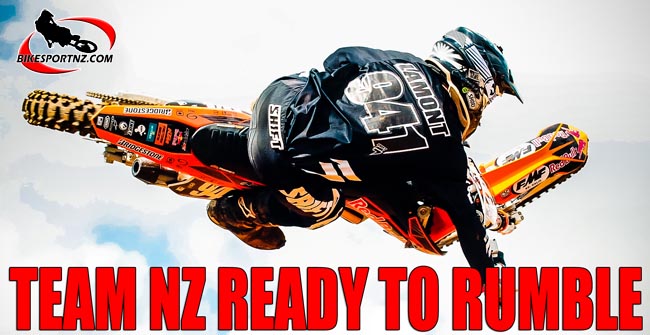 The Motocross of Nations is the biggest and best motocross of the year and once again New Zealand will have a massive presence at this “Olympic Games of motocross”.

It is just over two weeks away for the 67th edition of the great race, set this time for the steep hillside track of Teutschenthal, near Leipzig, in the former East Germany, and New Zealand again has a team this year that is capable of impressing – Mount Maunganui pair Cody Cooper and Rhys Carter and Mangakino’s Kayne Lamont.

They have a better chance than most of ending up on the podium late on the afternoon of September 29 (although that will actually be Monday morning back home in New Zealand).

From rookie first-timers in 1984 to top-10 regulars just over 10 years later – Team New Zealand cracked the top 10 for the first time, finishing seventh, in Slovakia in 1995 – Kiwi motocross riders now rate among some of the best in the world.

There have been some great MXoN races over the years, such as in 2006 when 10-time world champion Stefan Everts and Italy’s Antonio Cairoli dominated the racing at Matterley Basin, near Winchester, in south-west England, although Team USA did enough that day to win the main trophy anyway, finishing top of the podium with Team Belgium runners-up and the Team New Zealand squad finishing in third.

With Kiwi riders taking their careers overseas in increasing numbers, and New Zealanders lining up regularly at Grand Prix world championship events, or even at major domestic races in countries such as Australia, England, Belgium or the United States, the likelihood of New Zealand winning the Motocross des Nations has gone from far-fetched dream to achievable reality.

That is also perhaps the case in Germany on September 29, with New Zealand MX1 champion Cooper, Kiwi domestic frontrunner Carter and former Australian under-19 champion Lamont there to fly the Kiwi flag.

Since leading Kiwi internationals such as Motueka’s Josh Coppins, Tauranga’s Ben Townley and Hawera’s Daryl Hurley have retired from all overseas competition, New Zealand is now looking to the next wave of youth talent to step up and recently-appointed team manager Coppins said he was confident the squad would impress in Germany.

“I’d like to think that Team New Zealand can slip inside the top 10 again this time around. That would be great,” said Coppins.

New Zealand finished 15th when the race was staged in Belgium last season and this year’s edition of the big race is again shaping up as an extraordinary battle.

The racing will feature more than 120 of the best motocross riders on the planet. But, seeing as only 40 of those riders can line up at one time in the final three motos to decide who takes away the Chamberlain Trophy, a rigorous elimination process is required.

Perhaps another podium finish is not out of the question for our intrepid Kiwis.

Check back with BikesportNZ.com as our crew on the spot – Andy, Alex and Tom – keeps you up-to-date from the track throughout the race weekend.