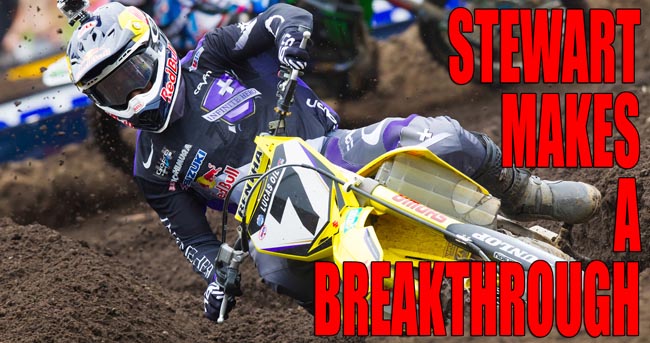 Suzuki’s James Stewart captured his first open class win of the season and Honda’s Eli Tomac took over the top spot in the 250cc class at the ninth round of 12 in the United States Motocross Championships at the weekend.

The 2013 Lucas Oil Pro Motocross Championships hit Millville, Minnesota on Saturday for the ninth round of the season at Spring Creek MX Park.

With temperatures cooler than usual in the Midwest, the Red Bull Spring Creek National produced plenty of exciting race action for the 31st annual event.

After a five-year winning streak at Spring Creek, Red Bull KTM’s Ryan Dungey missed the centre of the podium on Saturday. However, a Moto 2 win in the 450 Class gave Dungey’s hometown fans a reason to cheer for the Minnesota native.

In the end, it was Yoshimura Suzuki’s Stewart who captured the overall win at the Red Bull Spring Creek National, his first of the 2013 season.

As the gate dropped for Moto 1 of the 450 Class, Honda’s Justin Barcia grabbed the holeshot down the championship’s longest start straight, where he battled with his team-mate Trey Canard for the early lead. Dungey began the moto with the lead pack but a couple mistakes in the early moments caused the reigning champion to drop back as far as 11th place in the first moto.

Stewart jumped in behind Canard and Barcia off the start, where he quickly took over the lead position from the Honda-backed duo. Barcia and Canard swapped for second place, but Canard eventually made the pass on his team-mate for second. Canard closed the gap on Stewart’s lead towards the end, but it wasn’t enough to keep the 2008 450 class champion from securing the moto 1 win. Canard maintained the second-place position, while Barcia and Yamaha’s Josh Grant finished third and fourth, respectively.

Meanwhile, Kawasaki’s Ryan Villopoto was forced to work his way through the pack after a crash on the opening lap that left the points leader in 28th position. Villopoto ultimately made his way up to sixth place, where he finished just ahead of Dungey in moto 1.

Following his Moto 1 win, Stewart carried considerable momentum into the second moto as he grabbed the holeshot and led Dungey early on. The two former 450 class champions went head-to-head for the lead spot, but it was ultimately Dungey who settled into the front position.

The real battle in moto 2 came in the runner-up position between Canard and Stewart as the outcome would likely determine the 450 class overall winner. After a back and forth battle to the end, Canard was able to best Stewart for second place in moto 2. But Stewart’s 1-3 moto score was enough to top Canard’s 2-2 finishes en route to his first overall victory of the season.

“Things just came together today but it was probably the hardest two motos I’ve ridden since last year,” Sewart said. “We’re just building for next year so any little bit helps. I want to finish this thing [season] and get a couple more wins to carry the momentum into next season.”

Dungey maintained the lead through the end of moto 2, finishing 5-1 to salvage third place overall for the day.

Villopoto finished fifth overall with a moto score of 4-6 for the day, despite a valiant comeback effort in both motos. Round nine marks the first time this season that Villopoto hasn’t finished atop the overall podium, but the Monster Energy Kawasaki rider maintains the 450 Class points lead heading into the tenth round.

Honda’s Wil Hahn grabbed the holeshot in moto 1 of the 250 class, where he led the opening lap. Millville native Jeremy Martin got off to a second place start where he settled in behind Hahn early on. Honda’s Justin Bogle and KTM’s Ken Roczen went back and forth behind Yamaha’s Martin, where a three-way battle ensued. Roczen eventually passed Bogle, and then Martin, for the second place position, but Roczen experienced a crash that forced the Red Bull KTM rider to pull out of the first moto.

Martin moved past Hahn to take over the lead in front of his hometown friends and family but a hard-charging Tomac quickly caught up to Martin from behind. Tomac took over the lead and carried it through the finish, while Martin claimed a career-best finish of second place.

Hahn came out charging in moto 2 of the 250 class, grabbing his second straight holeshot of the day. Kawasaki’s Blake Baggett and Roczen pushed to the front early on, where the duo took turns leading the race. However, Tomac came from behind to interject himself into the lead battle about halfway through moto 2.

Tomac eventually moved past Roczen for the lead, where he maintained his position to capture his second moto win of the day and fourth consecutive moto win this season. Roczen finished second in moto 2, posting a moto score of 35-2 to salvage ninth overall for the day.

Tomac’s 1-1 sweep at Spring Creek was enough to claim the 250 Class points lead atop Roczen, who now sits 27 points behind in second.

Round 10 of the Lucas Oil Pro Motocross Championship heads to New Berlin, New York for the Unadilla National on Saturday, August 10.