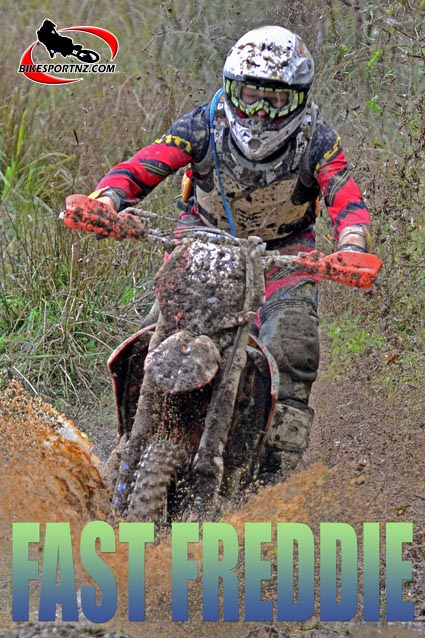 The writing was on the wall at Saturday’s fifth round of the New Zealand Enduro Championships and Auckland’s Freddie Milford-Cottam added an exclamation mark two days later.

The 21-year-old KTM ace had finished a remarkable runner-up to Kiwi international Chris Birch (KTM 350XC-F) at the national championship event in the Maramarua Forest, north-east of Huntly, on Saturday, but that was really just the start of an extremely busy Queen’s Birthday weekend for Milford-Cottam.

There was still a lot of riding ahead for the KTM ace, with that event for him signifying just the first day of action in the separate Maramarua Three-Day Enduro marathon.

Milford-Cottam, who is from the North Shore but is currently studying agricultural science at Massey University in Palmerston North, made the most of his long weekend away from the books, taking his KTM 200EXC into battle over three consecutive days.

“I was pretty thrilled with how I rode, particularly on Saturday,” said Milford-Cottam. “Finishing runner-up to somebody like Birch is pretty good you know. I had to settle for runner-sup spot behind him the next day too, but he wasn’t able to commit to day three and that left the way clear for me to get the win.”

Milford-Cottam finished ahead of Auckland’s Liam Draper (Husaberg TE125) on day three, giving him an unbeatable 2-2-1 score-line for the Maramarua Three-Day Enduro.

“The course was pretty rough on day two because we used some of the same tracks that we’d raced on for the national championship event. But the bike was flawless and the Metzeler tyres were great.

“I wasn’t looking at the times until the end of each day, so I didn’t really know how well I was going. I just went about my business and didn’t take much notice of anyone else.

“This is the first time I’ve been able to race the Maramarua Three-Day Enduro. Usually it is held in December and I have commitments to shearing on the farm at that time.

“I hope I can do this all over again. It was great fun.”