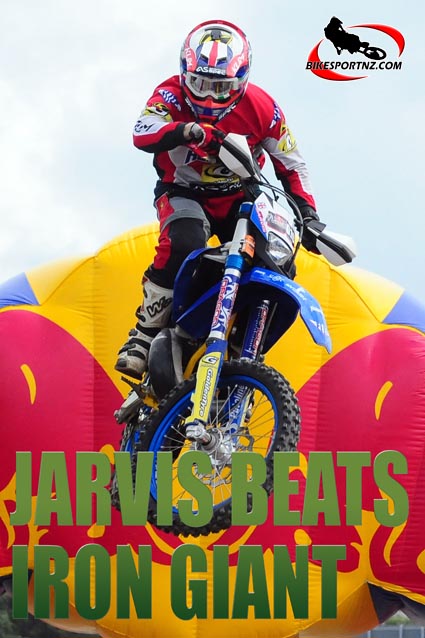 From a second row start, Husaberg Factory Team rider Graham Jarvis secured a long-overdue Erzberg win where he’s joined on the podium by Andreas Lettenbichler, with Alfredo Gomez in third.

After many years of disappointment and despair, Britain’s Jarvis finally had reason to celebrate at the end of the 2013 Erzberg Rodeo as he delivered one of the best performances of his extreme enduro career. Starting on the second row for the start of the Red Bull Hare Scramble, Jarvis delivered a faultless performance to claim a well-deserved win.

“For once this race has gone perfectly for me,” explained a delighted Jarvis. “I’m so happy to have finally won the Red Bull Hare Scramble – it’s amazing. Oddly, starting from the second row worked in my favour. I saw the riders on the front row have problems with the water so I knew I had to be careful. I stuck to my line and didn’t do anything stupid and cleared the quarry. Only after that did I think about racing.

“I pushed hard and steadily worked my way past as many riders as I could. I knew I was going well as I saw less and less wheel tracks ahead of me. Just before Karl’s Diner, I passed Lettenbichler and took over the race lead. I was happy to lead into Karl’s Diner because that’s usually my strongest section. Once out front I was able to ride my own race and opened up a decent lead. I didn’t run into too much trouble at Dynamite and after that I was able to cruise into the finish line to win the race.”

Claiming the chequered flag a massive 18 minutes ahead of second placed Lettenbichler, Jarvis finally topped the only extreme enduro race he hadn’t previously won. “It’s a massive relief to have finally won the Red Bull Hare Scramble,” concluded Graham. “It’s the only Hard Enduro race I’d yet to win. Missing out on the victory for the last three years makes this win extremely rewarding. I’m a happy man.”

Husaberg had a double reason to celebrate at the end of the Hare Scramble as Gomez secured a third place result. Following Jarvis during several of the earlier sections of the course, Gomez endured a tough time mid way through the race but even with a damaged clutch casing held on for a fine third place result.

“Thankfully I stayed out of trouble at the start and made it safely out of the quarry,” confirmed Alfredo. “When Graham passed me I tucked in behind him and followed him through the forest sections. We passed a lot of riders and reached the top five. I got stuck on the uphill out of Machine and lost touch with Graham. I attempted the hill about four times but couldn’t get out. Ivan Cervantes was also there so we teamed up to pull each other out of it.

“After that I kept riding on and managed to get up to third. Unfortunately I damaged my clutch casing and by the time I got to the hill named Dynamite my clutch was finished. I struggled so much there and panicked a little because Jonny Walker was catching me. It was a relief to get to the top of that hill because I knew I was within reach of the podium. It’s a fantastic feeling arriving at the finish line. I’m so happy to have finished third. It’s been a fantastic result for me.”

For South African youngster Wade Young Erzberg 2013 was all about learning and hopefully finishing. And the Husaberg mounted racer did both. Managing to make it through the deep water shortly after the start, Wade initially pushed too hard but soon realised that in order to finish he needed to slow his pace.

“This was my first time racing at Erzberg so it was all about finishing the race and learning as much as possible,” explained Wade. “My start was average and I got soaked with water during the first flood. Initially I tried to go too fast through it but my bike started to splutter so I rode steady and luckily came out of it. After that I just kept pushing and trying as hard I could. On a couple of occasions I thought I might not finish but I just dug deep and refused to quit. Like I said my main objective was to finish, nothing more. I’m very proud to have finished 11th.”

Another newcomer to Erzbergrodeo, Spaniard Mario Roman also made an impressive first result in the world’s toughest hard endure race. He’s almost made it to the finish but unfortunately ran out of time only a couple of minutes before the 20th checkpoint. New Zealand’s Jake Whitaker (Husaberg), who also competed at Erzberg for the first time, made it to the checkpoint 12, while Jane Daniels almost reached the checkpoint 7.