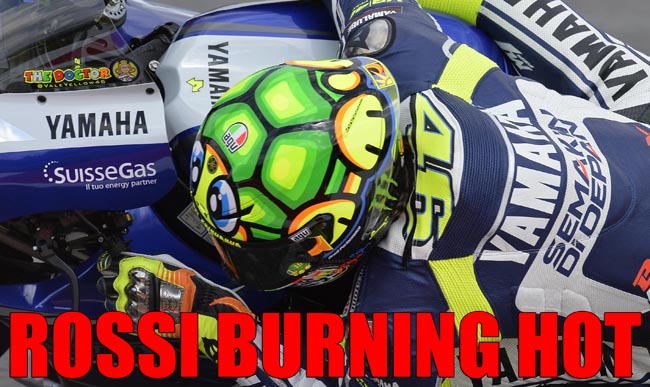 Italy’s multi-time world champion Valentino Rossi described his 80th MotoGP triumph in the Dutch MotoGP at Assen at the weekend as one of the best victories of his career.

The Factory Yamaha rider rolled back the years to claim his first MotoGP win since 2010 after a vintage performance at this seventh round of the championship.

Rossi passed Repsol Honda duo Marc Marquez and Dani Pedrosa to move into the lead of the race and was never seriously troubled thereafter as he powered his YZR-M1 to the chequered flag in front of an appreciative Assen crowd.

The 34-year-old appears to have made significant progress with the bike following a test at Catalunya and served a timely reminder of his braking prowess as he slipped underneath Pedrosa at Assen’s famous final chicane on lap 6 of 26.

“Today was something special, this is one of the best victories in my career because it is one of the most wanted and expected for such a lot of time,” said the seven time MotoGP champion, who endured two winless seasons at Ducati before returning to Yamaha for the start of 2013.

“I’m so happy because I won a real race where all my opponents were very strong and very fast, apart from Jorge with his injury.

“It was great from the beginning, I had a good feeling, I could overtake on braking and I felt good on the bike. It was difficult but the finish line was calling me so I had to arrive as fast as possible,” added ‘The Doctor’. “We have made a step with the bike, I can ride in a better way so we have to try and stay with the top guys every weekend.”

Rossi’s victory return was also welcomed by some of his rivals, who appreciated what the Italian has done to lift the profile of MotoGP: “I would like to congratulate Valentino, as it’s always good for motorcycle racing when he’s up at the front!” said runner-up Marquez.

Meanwhile Rossi himself paid tribute to the heroics of team-mate Jorge Lorenzo, who battled through the pain barrier following surgery on his broken left collarbone to take fifth.

“Jorge rode an incredible race, we have to say a special great congratulations because he had great courage to do this and also he made an important step for his championship.”

Championship standings after round seven: