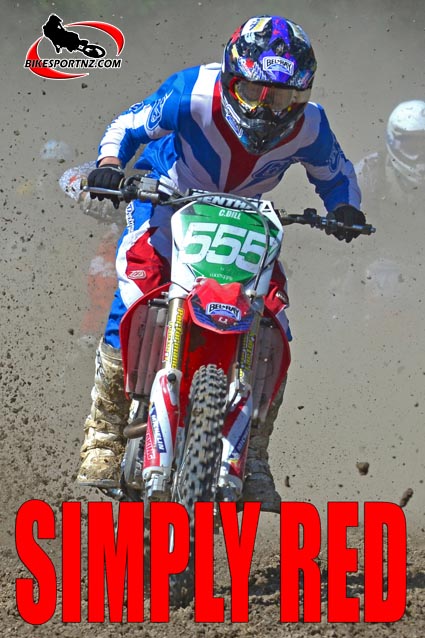 Even without the defending national MX1 champion to fly the flag for them, the Honda team remains an extremely potent force as it heads to the fourth and final round of the motocross nationals in Taupo this Easter Weekend.

National MX1 champion Ben Townley (Carlton Dry Honda CRF450) won the opening race of the 2013 New Zealand Motocross Championships in Timaru back in February – his title defence immediately on the right track – but then, just as quickly, his campaign was derailed.

The Bay of Plenty ace crashed in the second race in Timaru, putting the former world champion out of the rest of the event and he remains sidelined with injury.

Fellow Honda men Justin McDonald (Bel Ray Timaru Honda CRF450), of Christchurch, and Michael Phillips (Bel Ray Rowlinson Honda CRF450), of Rotorua, powered ahead and staked their own claims for national MX1 glory and, for this weekend’s series finale in Taupo, they will be joined under the red awning by Australian champion Ford Dale.

The 24-year-old Dale, from the Sunshine Coast, is Townley’s team-mate in the Carlton Dry Honda race team in Australia.

He was national MX2 champion across the Tasman last season and he has this year stepped up to the big bike category.

The Australian nationals are set to kick off on April 14 and Dale’s trip to Taupo for Sunday’s racing will present an ideal opportunity for him to warm up for that campaign.

“That’s exactly right … our nationals start in just a couple of weeks, so this is a chance for me to see where I’m at in term of pace. A few of the guys I’ll be racing in Australia are racing at Taupo this weekend.

“I raced in New Zealand when I was 10 years old, but I can’t remember much about it. I’ve heard the Taupo track is really good, though, so I’m looking forward to it.”

Dillon (pictured here) finished runner-up on the day when the final round of the nationals were also staged at Taupo last season and he’s hoping that a little local track knowledge might help him to achieve that result again, or perhaps he could even go one step better on Sunday.

“It is very unfortunate than Ben (Townley) is hurt again and we wish him all the best for a speedy recovery,” said Bel Ray Honda team manager Peter Finlay.

“We are now looking forward to welcoming Ford Dale into the team this weekend. It is going to be a very exciting weekend ahead.”

The ultimate glory for the MX1 class will likely go to Mount Maunganui’s Cody Cooper (Moto City Suzuki RM-Z450), as he holds a massive 31-point lead over visiting Scottish rider Billy MacKenzie (JCR Yamaha Racing YZ450F), with two Australian Motorex KTM riders, Todd Waters and Kirk Gibbs in third and fourth position respectively, but Dale will be keen to see how he matches up to this awesome foursome.

Dale will battle these four riders in the upcoming Australian Motocross Championships.