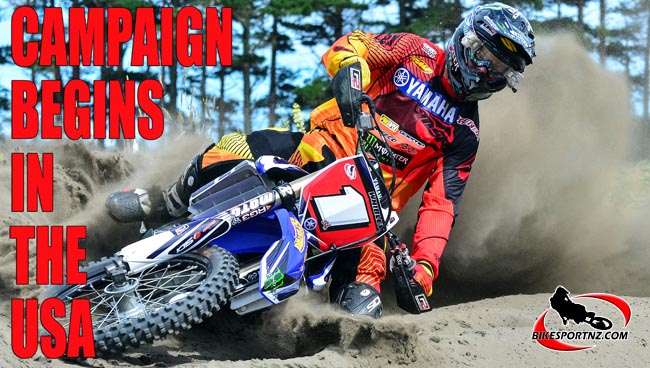 Paul Whibley’s 2013 cross-country racing campaign in the United States is off to a rough start.

But at the opening round of this year’s OMA series in Tuscumbia, Alabama, at the weekend, the Yamaha ace from Pahiatua had to settle for an unaccustomed fifth placing.

“The 2013 OMA season started well for me as I took the holeshot and led the way into the fresh woods,” said Whibley (Yamaha YZ450F).

“The trail was still covered in leaves and the recent rains had conditions a tad sloppy in places. While leading, I spent most of the time searching for arrows because the track hadn’t been used and I ended up blowing a couple of turns.”

American rival Russell Bobbitt took advantage of a mistake by Whibley in one of the corners, scooting past on the inside of the Kiwi hero.

“I continued to follow Russell and mid lap he blew a turn as well. I also overshot the arrows slightly and where I turned up ended being a real thicket of trees. I crashed my way through to the arrowed track but lost some time and Russell was able to hold onto his lead.”

“As I re-joined the track, Kailub Russell ran into my leg and I ended up toppling over onto him. It took a couple of seconds to get up as I was briefly stuck under the bike. Once I got back moving and got passed Shane Klimek, the leaders were out of sight and I found myself in no man’s land. I pushed hard but didn’t seem to be making any time up.

“With one lap completed in about 32 minutes, it meant the race would run around five laps total. After refuelling on the second lap, I put my head down and tried to bridge the gap but it just wasn’t happening.

“By the time the final flag flew I was still back in fifth position, well behind my Yamaha team-mate Jordan Ashburn and front runners Russell Bobbitt, Kailub Russell and Nick Fahringer.”

Whibley won every round of the OMA series last year, so a fifth placing is not something he regards favourably, but the season is long and unforgiving and there is plenty of time left for him to make amends.

So dominant was Whibley last season in the US that he wrapped up his record fifth consecutive OMA series win in August, taking the 2012 title early, with two rounds still left to run.

Whibley now prepares to begin also his title defence in the parallel GNCC series, the first round of that set for Florida on March 12, before tackling round two of the OMA series at Dawson Springs, Kentucky, on March 31.