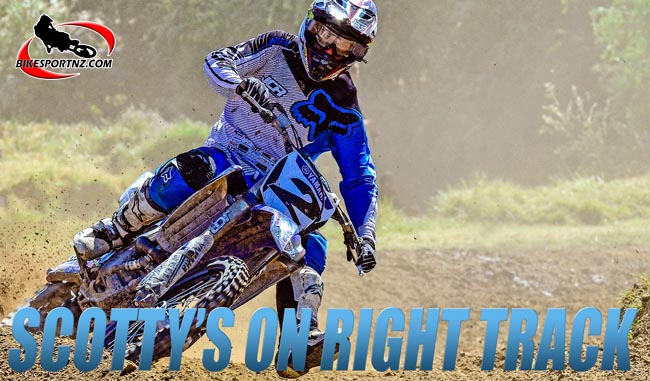 This season could be a breakthrough one for Queenstown’s Scotty Columb.

After many years of trying, the Kiwi international’s fresh partnership with Yamaha and old friend Josh Coppins could finally see him claim his first national motocross title.

The 29-year-old Columb came close to winning the No.1 plate in the MX2 (250cc) class last season, until he instead had to settle for the No.2 digit as evergreen Hamilton rider Darryll King (Yamaha YZ250) instead retained the title in 2012 that he had also won in 2011.

Columb joined the Coppins-managed JCR Yamaha Racing team during the off-season and since then has enjoyed a sparkling run on his new YZ250F bike.

He won the first of four rounds of the New Zealand Motocross Championships at Timaru two weeks ago, finishing 1-2-1 in his three MX2 class races that day, and he backed that up by finishing 4-1-4 at round two at Patetonga, near Morrinsville, on Sunday.

So, with the 2013 edition of the nationals reaching the halfway point in the Thames Valley on Sunday, Columb finds himself an impressive 16 points in front with just two rounds and six races – three MX2 class races at each of them – to wrap it all up.

“Scotty hurt his thumb on Wednesday, wrenched it quite badly, and we had to get a special brace built for his right hand,” said Coppins.

“He rode brilliantly, especially considering that he was hurt … I really didn’t think he’d be able to ride at all.”

The biggest mover on the day was Waitakere’s Ethan Martens (Yamaha YZ250). Martens finished 3-2-1 in his three MX2 races and rocketed up eight spots from a lowly 12th overall after round one to now be a solid fourth in the championship rankings.

“The day started rough for Billy,” said Coppins. “He crashed in the third corner of the first race and battled back to finish fifth. He scored a solid third in the next race but really showed his class in the third outing, starting well and snatching the lead on the opening lap.

“He never looked back from there and recorded his first win on the Yamaha, as well as his first win in New Zealand. He’s still behind (Mount Maunganui’s) Cody Cooper (Moto City Suzuki RM-Z450) in the championship standings and there are only two rounds to go. But anything can still happen.

“We will just keep trying to improve from here. We have a little bit of time before the next round, so Scotty’s thumb will have time to mend,” said Coppins.

The series now heads to Pukekohe on March 10 and it finally wraps up in Taupo on March 31.