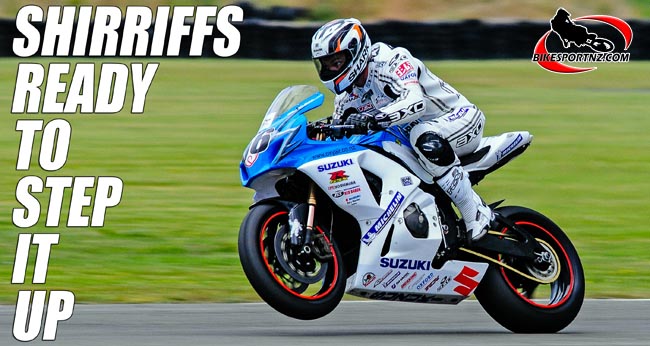 Mawanatu superbike ace Craig Shirriffs is ready to lead the Kiwi challenge to Australian star Robbie Bugden at Timaru’s second round of the New Zealand championships this weekend.

Bugden, the reigning and four-times champion, won both races at the opening round in Christchurch last weekend, with Shirriffs (pictured above) one of the few riders able to keep pace with him.

In the feature event, the New Zealand Grand Prix, Shirriffs battled with the Australian – both on Suzukis – for the first half of the race and briefly led it.

Now Shirriffs has overcome the problem that forced him to slow down later in the GP, and believes he has the speed to win.

“We were short of tyres so I used the same front tyre in both races,” he said. In the GP the tyre started losing its grip and Shirriffs nearly crashed, but now he has secured a good supply of tyres.

“I’m very happy with the bike and this is the best start I’ve ever had in the Superbike championship,” the experienced Feilding rider said.

“I enjoy the Timaru circuit; it suits my riding style. On paper it should be one of my better tracks. It would be good if I can finish the meeting equal on points with Robbie, or even ahead.”

Normally Bugden fights out the series with nine-time champion Andrew Stroud, but the Hamiltonian is out with a broken collarbone from a crash last month.

A strong group of Kiwis is keen to take up the fight, including Suzuki riders Hayden Fitzgerald (New Plymouth) and Dennis Charlett (Christchurch), who finished third and fourth respectively in both Christchurch races.

Hamilton’s Nick Cole had been expected to do better than his pair of fifths, but the Kawasaki racer finished the meeting in a positive frame of mind.

“We’ve improved the bike a lot over the weekend,” he said.

BMW rider Sloan Frost, from Wellington, was very fast in December’s Suzuki Tri-Series but had a disappointing meeting at Ruapuna, including a crash after contact with another bike. If he is back to his best he will be a strong contender.

The important 600cc Supersport championship usually sees big bunches scrapping at the front, but this season it looks like being a straight fight between Christchurch rider John Ross (Suzuki) and Auckland teenager Jaden Hassan (Yamaha). They both scored a win and a second at Ruapuna.

Bugden is not the only Aussie leading his series – Queensland teenagers Troy Guenther and Luke Burgess top the standings in 125cc GP and 250 Production classes respectively.