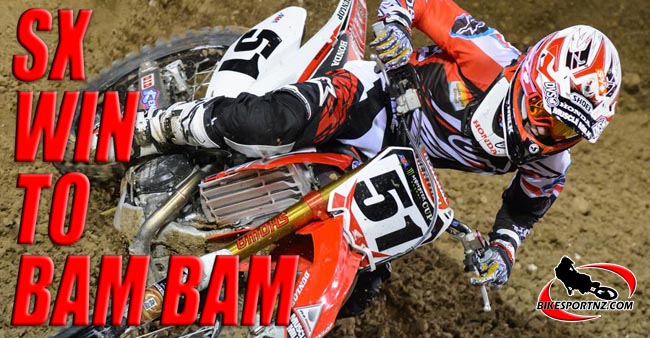 Also in front of the more than 50,000 race fans, Colorado’s Eli Tomac (Honda) won his second consecutive Western Regional 250SX class main event and now has a six-point lead in the season standings.

Barcia, who is in his rookie season, picked up the holeshot award in the 450SX class main event as last week’s winner, Davi Millsaps, and Honda’s Chad Reed, of Australia, trailed in second and third, respectively.

On lap one, two-time defending national supercross champion Ryan Villopoto (Kawasaki) spun out and dropped from fourth to eighth place.

Villopoto rebounded and moved into fourth place on lap 13 and then passed Suzuki’s Millsaps on lap 15 to gain third place.

Canard and Villopoto engaged in a battle for second place for several laps until Canard crashed on the last lap, allowing Villopoto, Millsaps and Reed to re-pass him. Villopoto finished second and Millsaps finished third, keeping the 450SX class lead in the season point standings.

“I can’t tell you how excited I am right now,” said Barcia, who became the 56th different winner in 450SX Class history. “I didn’t think this win would come so soon. I kept it smooth out there, but the track was super slick. It was a great night for me.”

On the opening lap, Davalos, who suffered a frightening crash in his heat race earlier in the evening, moved into the lead.

After a fifth-place start, Tomac made his way to second place and passed Davalos on lap seven, en route to his ninth 250SX Class race win with a 10.193 second margin of victory.

KTM’s Ken Roczen, of Germany, passed Davalos on the last lap to secure the runner-up spot. Davalos held on for a season-best third place.

“I am totally stoked,” said Tomac. “I am now two-for-two this season, and to get a win here in Phoenix is huge because I have a lot of family and friends here. I haven’t had a lot of great races here in the past, so picking up the win is awesome.”