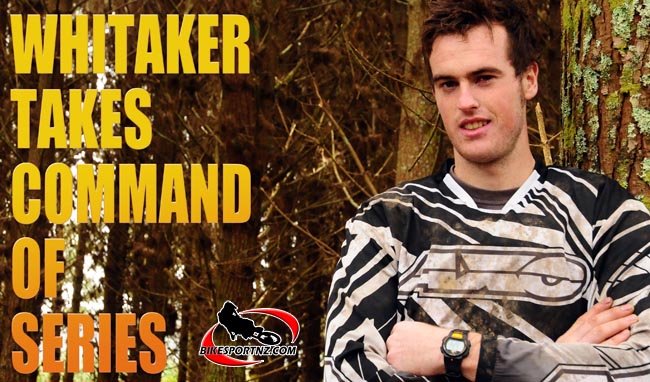 A last-gasp win to moto trials legend Jake Whitaker puts the Wellington man in the hot-seat as the inaugural KTM Extreme Enduro Series reached the halfway stage in Tokoroa at the weekend.

The man-made course played right into the hands of six-time former and reigning New Zealand moto trials champion Whitaker, the 21-year-old Kiwi international able to use his incredible balance and throttle-control techniques to ride the obstacles that included a massive rock pile, logs bundled together to form a mini mountain, a firewood pit and ‘forest’ of upright logs.

It was a KTM 1-2 and moto trials 1-2-3 with Whitaker eventually leading fellow trials guns Jim Lowe-Pattie (KTM), of Tauranga, and Rotorua’s John Haynes (125 Beta Evo) to the podium on Saturday, although the racing was far from one-sided with any of half a dozen riders each challenging for the win at this second round of four in the series.

Taupo’s Greg De Lautour (KTM) led for the first three laps of the 10-lap final in the Tokoroa A&P Showgrounds on Saturday, until he lost that advantage when he went over a track-side barrier.

Lowe-Pattie was in the front right up until the final lap when he, too, struck problems and Whitaker pounced to snatch the victory in sight of the finish line. He eventually won by just four seconds from Lowe-Pattie.

With KTM Extreme Enduro Series round one winner Mike Skinner knocked out of the competition at the semifinal stage in Tokoroa, it puts Whitaker in prime position to push on and win the series. Whitaker finished fifth at round one, the Riverhead 100, in Auckland’s Riverhead Forest, a fortnight ago.

“Everyone had two races each and then came the knockout heats. I won my first heat and was second in the other. I then needed only a top-four in the semi-final to reach the final.

“It was very hard to pass riders on this course, so I knew a good start was essential for the eight-rider final. But I had a shocker and was about last at the start of the final and forced to play catch-up.

“I was up to third by about the third lap and then saw Jim (Lowe-Pattie) making a couple of mistakes and I gained on him. It was a pretty cool feeling to get through and take the win.”

While these will remain stand-alone events, Clarke is now able to offer a special prize to the one outright winner in each bike class.

Round three is set for Te Puke on February 9, using a man-made course that will be similar to the Tokoroa one and again likely to suit the moto trials experts.

“At the series final, the No Way In Hell extreme enduro at Oparau, in March, the riders with the best tally from any three of the events will take home the trophy and the bragging rights,” said Clarke.

“All the No.1 riders from all the motorcycling codes have come together for this.”