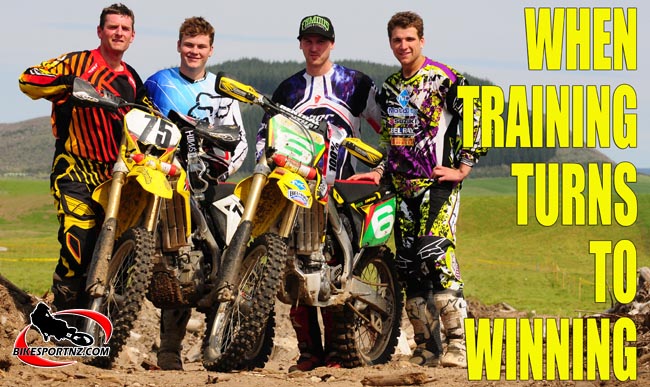 A training ride by a couple of motocross stars turned into a cross-country victory at the big annual Taupo Four-Hour endurance race on Saturday.

Two separate Suzuki teams took the top two spots on the winners’ rostrum at the Acerbis and Suzuki-sponsored event, the two top crew experiencing contrasting fortunes throughout the day.

Mount Maunganui’s Rhys Carter took his Suzuki RM-Z250 into the lead soon after the shotgun blast that signalled the start to the gruelling race and he quickly began to stretch out that advantage.

By the time his first lap was completed on the Tahorakuri Forest course, and he had arrived at the pits for a refuel and to hand over the bike to his team-mate, Manawatu’s Jesse Donnelly, Carter had built his team an almost two-minute lead over the chasing bunch.

Two laps later and the gap was out to four minutes over the next best duo, the Burgess brothers, Reece and Allan (KTM 350 SX-F), from Tauranga, while another Suzuki pairing, Te Awamutu’s Mark Penny and Kaukapakapa’s Josh Jack were on the charge and by then up to third overall after a “shocking start”.

Penny and Jack eventually found a way past the Burgess brothers, Penny taking advantage on the fifth lap of seven when Reece Burgess made a small mistake and crashed in front of him.

The runners-up finish achieved by Penny and Jack was remarkable in that they battled through from 25th at the start, to be in 10th position at the end of lap one, sixth after two laps and third after lap four.

Hard work, skill and determination had taken them from a seemingly impossible situation and thrust them into a position to actually challenge for the win.

But, in the end, nobody had an answer for Carter and Donnelly, the pair eventually taking the win by just under three minutes from the hard-charging Penny and Jack.

Instead of sharing the one bike, Penny and Jack opted to ride their own machines, passing the ‘baton’ at each change-over. This meant their turn-around in the pits was much quicker than the Carter/Donnelly pair, who had to refuel the bike or change the air filter each lap.

But it also meant Penny and Jack were classified as a ‘big bore’ (over-300cc) team because Penny was on his RM-X450. Even though Jack opted to ride his RM-Z250, the team’s classification was determined by the larger engine capacity of the two bikes used.

However, it also meant Suzuki won both the small bore and big bore trophies.

“We were forced to play catch-up all day,” said the 38-year-old Penny afterwards. “I got a shocking start and then crashed when another rider fell in front of me. We couldn’t close the gap enough on Rhys (Carter) and Jesse (Donnelly) … those guys were on fire … but I’m happy with second.”

Jack, an 18-year-old apprentice builder, said it was hard work on the rough track, especially when he lost his rear brakes on his first lap.

“But I suppose brakes just slow you down anyway,” he laughed. “It was great to have such a good team-mate. Mark is so relaxed and he has so much experience. I learned a lot from him.”

National MX2 motocross No.3 Carter, who is using cross-country events to help build towards the 2013 season motocross nationals, said he was pleased with his level of fitness.

“I knew we’d have to take more time in the pits than some of the other riders, so I went pretty hard at the start,” said Carter. “That paid off because we had a clear track in front of us for quite a while, until we started lapping riders anyway.”

Manawatu signwriter Donnelly also pushed hard and a big crash on the sixth lap of seven nearly cost them everything.

“I went down pretty hard and lost a lot of time,” said the 23-year-old Donnelly. “But, thankfully, it all worked out in the end.”