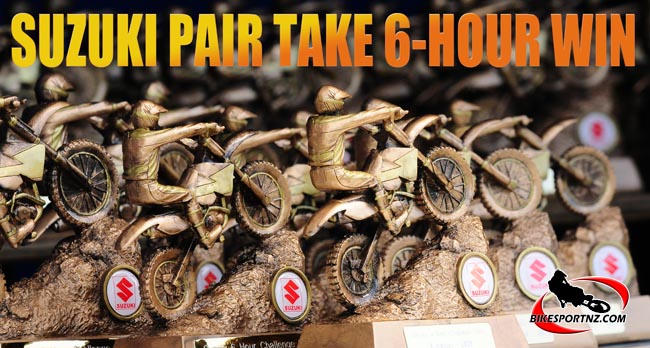 In a return to past glory, this year’s resurrected Suzuki Six-Hour off-road dirt bike marathon on Saturday was a resounding success.

Te Awamutu’s Mark Penny and Queenstown’s Scotty Columb came together to co-ride a Suzuki RM-X450, the combination tipped as one of the pre-race favourites for the gruelling race, the course set out on forestry land midway between Taupo and Tokoroa.

Penny and Columb more than lived up to that billing, the two men going on to comfortably win Saturday’s big race. They finished more than four minutes ahead of one of the other highly-fancied partnerships, Auckland’s Chris Power and Palmerston North’s Adam Reeves (co-riding a Yamaha WR450F).

The six-hour race had not run since 2009 because of problems with damage done by rain to the traditional course in Hawke’s Bay and also due to issues with consent for land use, but Tokoroa’s Sean Clarke stepped forward to resurrect the event this year and the nation’s elite off-road racers responded by showing up in numbers.

The victory on Saturday meant the 38-year-old Penny became a four-time former winner of the Suzuki Six-Hour. 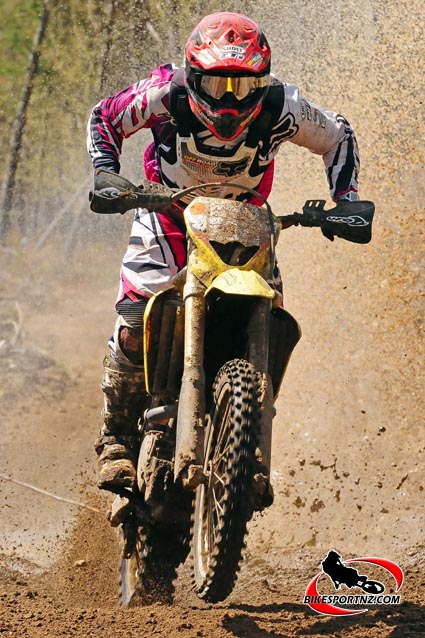 Penny had previously teamed with Columb in 2005, but a flat tyre meant they had to settle for runner-up spot on that occasion, and that made Saturday’s result a very welcome one for the South Islander as he was able to claim his first big success at the Suzuki Six-Hour.

Early in the race, Penny and Columb were made to work very hard, with Tauranga ironman Reece Burgess (Husaberg FE450) – riding solo for the six-hour duration – grabbing the lead at the start and Auckland pairing Freddie Milford-Cottam and Michael Skinner (co-riding a KTM XCW200) also challenging strongly.

But, in the end, the Penny/Columb combo snatched the lead on their third lap of nine and, from there, they never looked back.

Penny rode the first two laps for the dynamic duo, engineering a solid start, finding himself in about third place as the 103 bikes entered the forest immediately after the shotgun start just after 9am.

“I didn’t want to push too hard on the opening lap, so, satisfied with my position, I just settled into a rhythm. The idea was to stay consistent, make no mistakes and definitely to not fall off. I got faster as the day wore on,” he explained.

The 28-year-old Columb (pictured above), who works as a tour guide for Off-Road Adventures in Queenstown when he’s not racing, said it was “tough at first” to get to grips with the race when he took over the bike for the duo’s third and fourth laps.

“I had only been back in the country a week after doing supercross training in Georgia in the United States. So, to come from doing massive jumps to riding in the bush and dealing with slippery tree roots was quite an adjustment to make. The first lap was pretty daunting but I got better after that.

“I had won my bike class at this event in the past but never won the event overall before, so that was great. The bike was brilliant. The RM-X450 is a trail rider-friendly version of the RM-Z motocross bike, with a more mellow power delivery, a headlight and electric start. It suits enduro riders or people who want to go trail riding. It’s obviously a good race bike too,” he laughed.

“I want to give credit to Reece Burgess. He was racing it as an ironman and he led for quite a while. He’s definitely going to have ‘monkey butt’ this week.”

Only five teams or individuals completed nine laps in the six hours, with some combinations managing just three or four of the 32-kilometre laps.