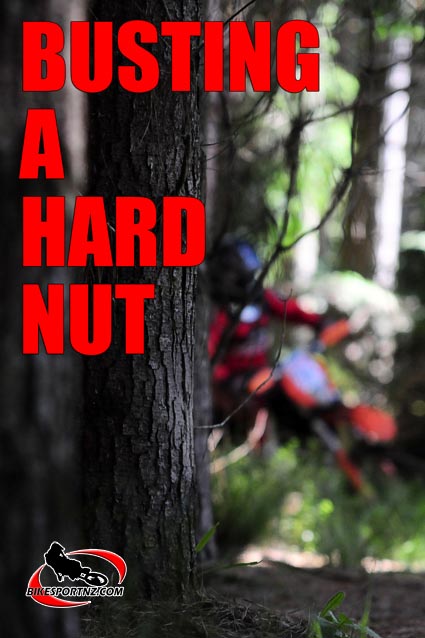 Now in its third year of running, the Value Cars Nutbuster Hard Enduro was held near Oxford in Canterbury on September 29, and this time around it came under attack from a group of North Island dirt bike stars.

With the event having grown in stature every year since its inception in 2010, the brain child of a group of enthusiastic local Cantabrians, the event was, this year, looking to expand its horizons.

With new, more technical deviations being added for pro and expert riders with some new slippery creek sections, riddled with waterfalls and a new pro only section to test the more experienced riders, it was developing well.

The event, this year, attracted even more of the country’s most talented offroad and extreme riders with the likes of Mitchell Neild, Mike Skinner and Sean Clarke  making the journey south along with the usual south island suspects with more than 70 riders taking on the extreme terrain.

Riders were started in groups of four at 30 second intervals in order of classes. It was Mitchell Nield who took the early initiative aboard his GasGas EC300 with the likes of Clarke, Skinner and a flying Greg Delautour who slapped a pass on Nield for the lead on the second lap, with a broken arm ending his day early on the third lap.

With the racing still tight between the top three of Skinner, Nield and Clarke, the North Island duo battled hard on the final lap with Tokoroa’s Clarke making the pass on Nield and taking his new KTM 350EXC to the top step of the podium for his maiden Nutbuster win.

This year’s event was very well liked among riders and spectators alike with several of the competitors who have previously competed in the likes of Romaniacs and Roof of Africa saying that “the track was very well marked” and that “this event is world class and very similar to the type of riding you do at Romaniacs”.

A big thanks has to go to everyone who organized this event, Steve Grossi, James Petrie, Mark Macdonald and everyone who helped out with track marking, etc.

The event will look to keep expanding with some new exciting sections of track already in the pipeline for next year’s event, we’ll look forward to seeing you there.