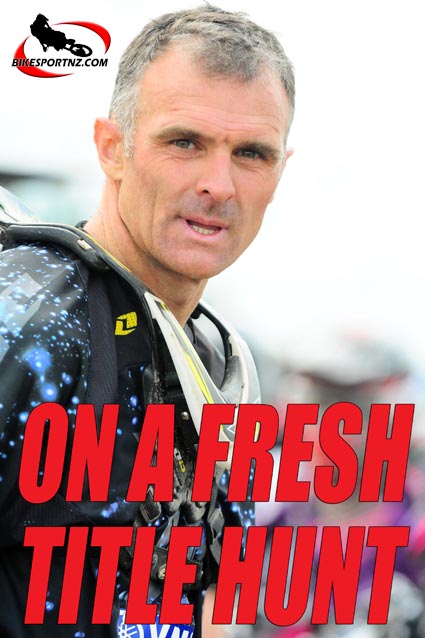 The Kiwi great has been making a habit of defying motocross odds over a career spanning more than 35 years.

Not only did the 43-year-old Waikato man successfully defend his national MX2 championship crown this season, making it sensational back-to-back title wins at the top domestic level of the sport in New Zealand, but, even more remarkably, he also did that as a man heading into his mid 40s.

His latest motorcycling adventure is to re-live his heyday years – the Yamaha ace now back racing in Europe, where he had raced with so much success in the 1990s.

He twice finished runner-up in the 500cc motocross world championships, in 1997 and again in 1998, both times beaten to the main prize by Belgian legend Joel Smets (on a Husaberg at the time).

King (Yamaha) will tackle the World Veterans’ Motocross Championships weekend, an event that shares the programme with the 14th round of 16 in the Motocross World Championships at Matterley Basin, near Winchester, in south-west England on August 19.

“I have come to Europe earlier than I planned. I am staying Belgium and have a new YZ450F from an old friend and Yamaha dealer Jos Dophijn in Antwerpen, Belgium.

“He has just built a new shop and it has five floors, one is a museum with about 50 of his ex-factory machines from the past 20 years.

“The weather here has been hot this week … 31 degrees today … and I have been out riding in that heat.

“Riding sand has been fun and I’ve had to change a few things on the bikes suspension to be ready for the big jumps I will encounter in England at the World Vets.

“There is going to be some tough competition at the world vets. I’ve heard John Dowd, from the United States, Marnicq Bervoets and Johan Boonen, from Belgium, are entered for the event. It’s nearly like the old GP days.”

Meanwhile, here is a video clip of Smets, racing against Kiwi brothers Shayne and Darryll King at Namur in 1996, the same season that Shayne King became 500cc world champion: