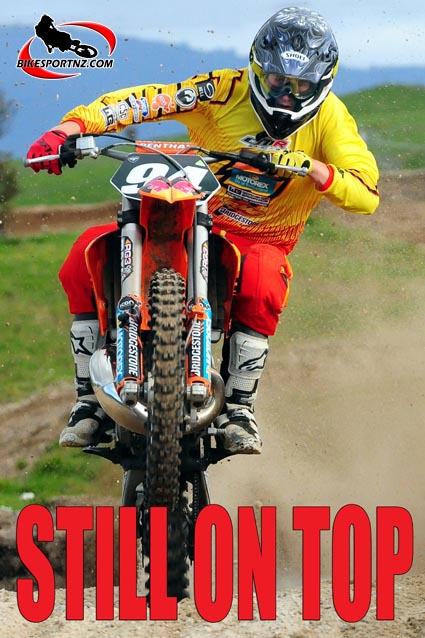 New Zealand’s Kayne Lamont is still the man to beat across the Tasman.

He battled to third overall at the latest round of the Australian Under-19 Motocross Development Championships at Appin, New South Wales, at the weekend.

But, most importantly, he has managed to maintain his vice-like grip on the championship lead.

“It was a hard-pack track and, being on a two-stroke bike, I had problems with wheel-spin on the slick surface,” said the 19-year-old Lamont. “The track suited the four-stroke bikes.

“In the last race of the day I got smashed into twice and was knocked back to 12th or 15th spot. I fought back, though, and managed to claw my way back up to finish fifth.

“I’m thrilled to be still leading and to come away with my points lead intact after a horror day like that … well I’ve got to be happy don’t I?

“I don’t like coming third, especially after winning four rounds in a row, but I simply struggled to get the power to the ground.

“I’m physically in great shape at the moment, probably the fittest I’ve been and now I have two weeks to rest up before the next round.

“I’m not panicking about the result on Sunday. I’m not happy to drop points but I’m still with a solid lead in the championship.”

The BikesportNZ.com star enjoys a 27-point lead in the series ahead of Long.

MXD Championship Standings (after 7 of 9 rounds):