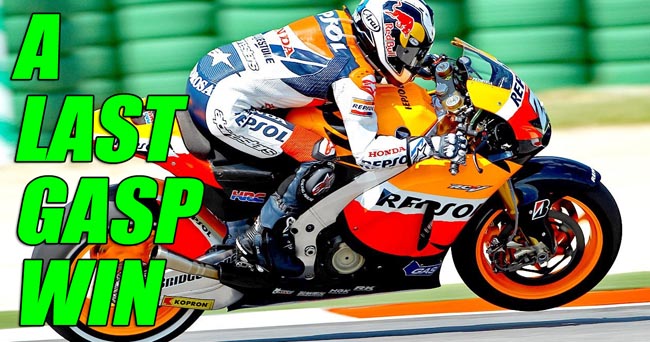 Spain’s Dani Pedrosa took a last-turn victory over MotoGP title leader Jorge Lorenzo during a finish to the Czech Republic Grand Prix at Brno at the weekend in a thrilling race that also saw Cal Crutchlow claim his first podium in third.

Lorenzo had dived under Pedrosa to retake the lead through the stadium section on the final lap, only for Pedrosa to draw back alongside on the uphill run to the last chicane at this 12th round of 18 in the series.

Both hit the brakes at the last possible moment, with Lorenzo trying to hold on around the outside. But Pedrosa had the better line and clung on to claim surely his best ever MotoGP victory by just 0.178s.

The race took place in cool but dry conditions after heavy overnight rain, with pole sitter Lorenzo holding the lead until just after the halfway point of the 22 laps, when Pedrosa out-braked him into turn three.

But Lorenzo had offered little resistance, suggesting he may have allowed the Honda rider past.

Either way, Pedrosa – quickest throughout practice, but third on the grid after a crash in qualifying – was unable to escape and a prowling Lorenzo inevitably launched a last lap attack. But it wasn’t enough to prevent Pedrosa emerging with his third victory of the season.

Lorenzo will now take a reduced 13-point advantage over Pedrosa into the Misano round on September 16, the first of six remaining events.

Pedrosa’s team-mate and reigning champion Casey Stoner has returned to Australia for surgery on his injured ankle, removing him from what is now an all-Spanish title battle.

Stoner’s absence effectively opened up a place on the podium and, starting from a MotoGP best of second on the grid, Crutchlow made the position his own throughout.

Team-mate and future factory Ducati rider Dovizioso – seeking his sixth podium of the year – kept Crutchlow in sight for much of the race, but the Briton held his nerve and pulled away in the closing stages.

Spies had yet another disastrous race, dropping back to 14th after a technical problem on the opening lap, later diagnosed as a slipping clutch.

The Texan then regained pace and began moving up the order, until he crashed out with ten laps to go, marking his third non-score in a row.

Honda LCR rookie Stefan Bradl, whose father won the 1991 250cc Brno race, rose from seventh on the grid to fifth, after getting the better of Bautista and then Rossi.

Rossi, the lone factory Ducati rider due to Nicky Hayden’s Indianapolis injuries, began the race from a season-best sixth on the grid.

Despite his Desmosedici spewing out smoke in the early laps, Rossi briefly got ahead of Dovizioso, but Rossi couldn’t keep pace and finished 34.5s from Pedrosa.

The second all-Spanish last lap battle was between de Puniet’s team-mate Aleix Espargaro and Toni Elias for tenth. Espargaro got the upper hand by less than 0.1s after a late pass.

Former Brno MotoGP podium finisher Elias was standing-in for the injured Hector Barbera at Pramac Ducati for the third race in a row.

A one day official test will be held back at Brno on Monday, when World Superbike star Jonathan Rea will be testing Stoner’s Repsol Honda.