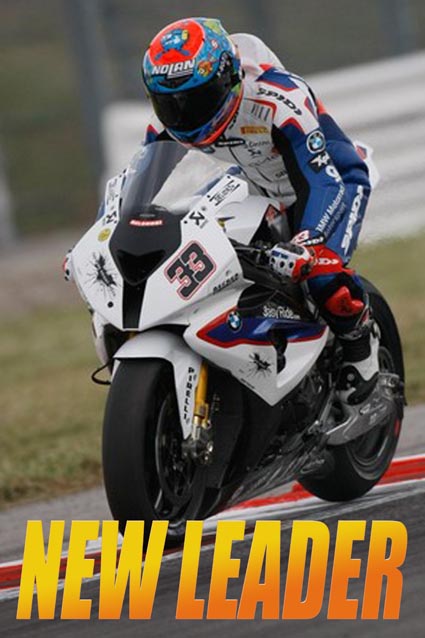 Italy’s Marco Melandri and BMW have moved into the lead of the World Superbike Championship standings for the first time after storming to victory in the second race at the Moscow Raceway, while erstwhile leader Max Biaggi crashed out in dramatic circumstances.

Having finished second and third in race one, the two championship rivals came into the second Russian race split by just 6.5 points in favour of the Aprilia rider, but a better start by Melandri would give him the upper hand during the early stages as they ran fourth and eighth.

Up at the front, race winner Tom Sykes got the jump at the start once again, forging his way into an early lead initially ahead of Eugene Laverty, Leon Haslam and Melandri, though the latter rider quickly made his move to pass both Haslam and Laverty for second into the braking area of the tight final corner.

Undeterred, Laverty fought back straight away on lap six, lifting Melandri up and allowing Haslam to also overtake. With Biaggi having also progressed to fifth, the two rivals found themselves line astern in fourth and fifth for a time, but Melandri would simply repeat his moves on the two riders ahead of him to snatch back second by lap eight.

By contrast, just as Melandri was passing Laverty for second into the final corner, Biaggi had misjudged his braking and would drop behind Jonathan Rea and Carlos Checa into seventh, a mistake that provisionally put Melandri at the head of the standings.

However, worse was to follow for Biaggi on lap ten when his attempt at passing Jonathan Rea on the long straight would see him get too close to the Honda as they entered the braking zone.

Making light contact as they went side-by-side and forcing him to ease off the brakes momentarily, Biaggi couldn’t get the bike stopped in time and would slam into the back of Leon Haslam’s BMW ahead, sending both barrelling out of the race.

Desperate disappointment for the entirely innocent Haslam, though the Briton was seen walking away from the accident, he has been admitted to the medical centre for checks.

Left with an effective ‘open goal’ as a consequence of Biaggi’s retirement, Melandri nonetheless set about going one better as he hunted down Sykes. As it happens, Melandri wouldn’t take long to get onto the back of the Kawasaki, biding his time before performing his favoured overtaking pass into the final corner.

It would prove the last decisive moment of the race as Melandri cruised home for a sixth victory of the season, a result that sees him overturn a 6.5 point deficit into an 18.5 point advantage and marks the first time BMW has ever led the World Superbike standings.

The fight for second place went down to the wire as Sykes came under increasing pressure from a resurgent Jonathan Rea and Eugene Laverty, the pair coming on strong in the latter stages to latch onto the back of the ZX-10R.

Indeed, with Sykes seemingly slower than the pair through the twisty infield, the trio would swap positions continually, but as they rounded the final lap it was Laverty who had the edge on Rea.

However, with just two corners of the race remaining, Laverty would be thrown into a high-side on the exit of turn 14, right into the path of Rea, who had nowhere to go but into the cartwheeling Aprilia.

Sending both off their bikes, even the close-following Carlos Checa was forced to take evasive action onto the grass, a melee that duly promoted Chaz Davies from sixth to third place, a fortuitous but impressive second podium of the season for the ParkinGO Aprilia rider that goes a long way to making up for the problems that cost him a similar result in race one.

Checa recovered to fourth, still one place higher than he would have finished without the crash ahead, while Leon Camier came from 18th on the grid to claim an unexpected fifth place finish on the FIXI Crescent Suzuki, even passing Davide Giugliano in the closing stages.

Rea remounted to score some points for Honda in seventh place, just in time to hold off a train of Ayrton Badovini, Loris Baz and Lorenzo Zanetti.

Unable to replicate the form that saw him win at Silverstone, Sylvain Guintoli crossed the line 11th, ahead of John Hopkins, David Salom and Alexander Lundh, the remaining finishers in 12th, 13th and 14th.

As well as Biaggi, Laverty and Haslam, race one top five finisher Michel Fabrizio crashed out on the opening lap, while David McFadden and Hiroshi Aoyama were involved in a collision at the final corner on the first lap too.

World Championships Standings (after 11 of 14 rounds):