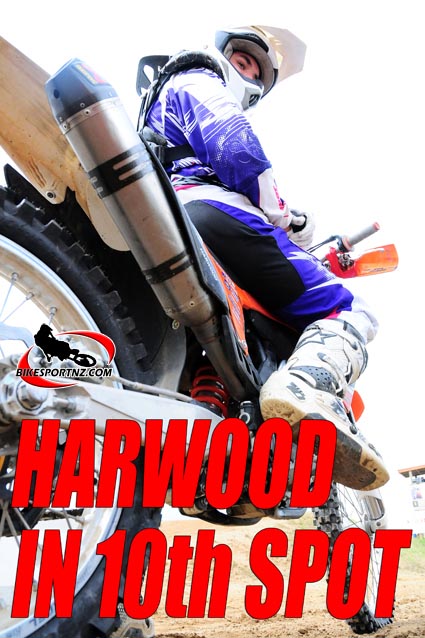 Takaka’s Hamish Harwood may have been the only Kiwi in action at the FIM Junior Motocross World Championships but he still managed to fly the New Zealand flag high, finishing 10th overall in the ultra-competitive 125cc class in Bulgaria at the weekend.

The former New Zealand junior champion finished 11th and 13th in his two outings on the Bulgarian circuit.

Team Netherlands was on the top of the podium this weekend as the winning team of this year’s edition thanks to their consistent results, team Italy was second and Team USA completed the top three.

In the first race the Slovenian rider had a good start and he rode second during the opening lap, but he quickly overtook Simone Furlotti and dominated the moto until the chequered flag. The second heat was not that easy for Gajser, who could not start at the front and had some difficulties to overtake Italians Furlotti and Bonini. Besides, Gajser admitted that he had some problems with the rear brake during the second heat, but in the end he managed to win the race and also the World Title.

Team Castellari’s Simone Furlotti rode really well today and thanks to his solid 2-2 result the Italian received the FIM silver medal and his result helped Team Italy to qualify second in the Nations classification. In both heats Furlotti started at the front, but whereas in the first moto Gajser easily overtook him, in the second one the Italian hold the lead until the very last laps of the final race.

KSM Racing Team’s Pauls Jonass, who was the FIM 85cc Junior World Champion last year, proved his incredible talent today in Sevlievo finishing on the third step of the podium in his first year in the 125cc class. At some point of the first heat, the Latvian was really close to overtake Furlotti for the second position, but in the end Jonass finished third. In the second race Jonass did not have a good start, but he succeeded in crossing the finish line fifth and obtained the overall third result.

Rockstar Energy Suzuki Europe’s Jorge Zaragoza, who obtained the pole yesterday, missed the podium for just three points today. The Spanish rider did not have a good start in the first race, as he was blocked in the first corner, and he had to fight really hard from his initial twelfth position to cross the finish line sixth. Zaragoza was exhausted after the race, but he gave it all to be fourth in the final moto and finish fourth of the championship.

HM Plant KTM UK’s James Dunn had a difficult first race because he crashed in the first corner and had to fight from the back of the pack to cross the finish line tenth. Things started much better for the British rider in the second moto and thanks to his third well deserved position Dunn finished fifth overall of the championship.

Vaclav Kovar from the Czech Republic had two really good starts – he took the holeshot of the second race – but he crashed in both heats while he was riding with the top five riders. In the end Kovar finished sixth overall thanks to his 7-6 result.

Calvin Vlaander from the Netherlands was seventh, ahead of South African Nicholas Adams, and Danish Tomas Olsen and Hamish Harwood from New Zealand completed the top ten.

American riders Jarec Balkovic and Jordon Smith were touched by bad luck in the first race as both got a DNF; while Smith got some green fence stuck in his rear wheel, Balkovic got a mechanical problem, so both had to pull out from race one. In the second heat they could not do that well either and they were twelfth and sixteenth respectively. Smith finished eighteenth overall and Balkovic twentieth.

Italian Davide Bonini did not have a good start in the first race and he finished ninth, but his performance in race two should be stood out because he managed to ride second most of the heat. Unfortunately, Bonini crashed in the last minutes of the race and the moto was over for the Italian. 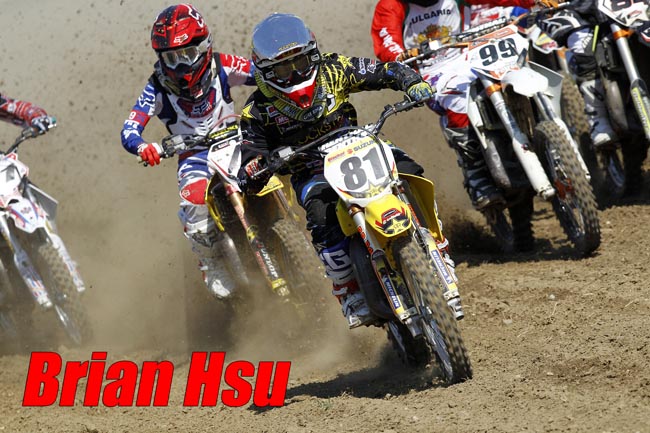 Rockstar Energy Suzuki Europe’s Brian Hsu was proclaimed the 2012 FIM 85cc World Champion after finishing 3-1 in today’s races. The German rider admitted that he was not expecting to finish on the podium this weekend, especially because he was sick and he felt really weak before the races started. However, Hsu gave all his best to finish third in the first race and in the second one he was the first one to reach the first corner and from then on it was him dominating the heat.

The second overall position was for Team Green Monster Energy Kawasaki’s Austin Forkner, who finished tight in points with Hsu and he actually lost the Title in the last metres of the second race. After winning the first heat, Forkner did not have a really good start in the second race, but lap after lap he was recovering some positions. In the last laps, the American exchanged the second position with home rider Ivan Petrov, and Forkner was second in the last lap, as well as the virtual 85cc World Champion, but his bike started to fail and the American lost one position when he was approaching the finish jump.

Current 85cc European Champion Davy Pootjes admitted that he struggled a little bit with the demanding track of Sevlievo, but his 2-5 result gave him the third overall position in the championship. The Dutch rider starred in a dogfight for the second place with American Forkner in the first race, but once the American overtook him, Pootjes decided to ride safe and while Forkner was winning the race, Pootjes crossed the finish line second. The Dutch rider did his best in the final moto, but he was only able to finish fifth.

Home rider Ivan Petrov made the crowd go crazy especially in the second race when he was fighting with Forkner for the second position. In the end, Petrov crossed the finish line second in front of the American, but his ninth position in the first race made him finish fourth overall.

Italian Tomas Ragadini completed the top five of the 85cc class; Ragadini was sixth in the first race, but in the second one he had a really good start and at some point he was fighting for the second position. Finally, Ragadini crossed the finish line in a solid fourth place, which gave him the fifth overall position.

2010 FIM 65cc Junior World Champion Jake Pinhancos had an excellent start in race one and after taking the holeshot he opened a comfortable gap in the lead. Unfortunately, the American had some mechanical problems and he started dropping positions; in the end the American succeeded to cross the finish line in the fourth position. In the second race he did not start that well and Pinhancos was seventh, which gave him the overall sixth position.

British Conrad Mewse got stuck in the starting gate in race one and had to give it all to finish twelfth. In the second heat Mewse was once again twelfth and he obtained a final tenth position.

Australian Caleb Grothues was the clear dominant of the 65cc class after winning both heats with superb authority. Grothues won the first race with almost twelve seconds advantage over second qualified Raivo Dankers, and in the second race the Australian was also able to open a comfortable gap with his pursuers and cross the finish line seven seconds ahead Slovenian Luka Milec, who finished seventh overall, as he was only fourteenth in the first race.

The second overall place was for another Australian, Riley Dukes, who succeeded in finishing third in both heats. The big surprise of the day in the 65cc class was the young talent from Romania Robert Tompa, who completed the top three thanks to his consistent 4-5 result.

Xylian Ramella, current 65cc European Champion, did not have really good starts today. Besides, in the first race he crashed in the last lap when he was fighting for the second place and he could only finish fifth. In the second moto Ramella was only able to end eleventh, which gave him the overall tenth position.