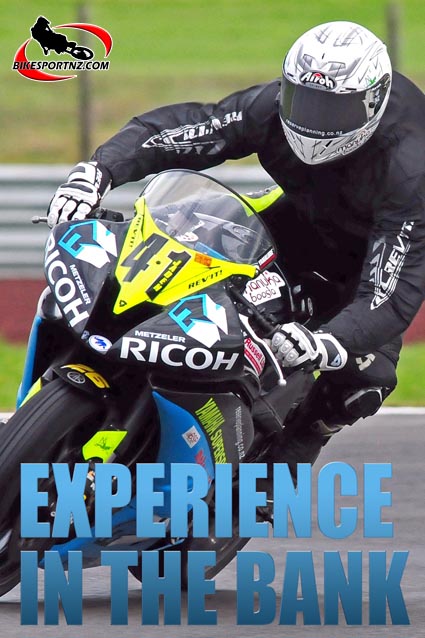 New Zealand’s Jaden Hassan has banked a huge deposit of experience after his latest international foray and the road-race ace is keen now to compound that and cash in on the race tracks back home.

The 18-year-old Yamaha ace from Westmere, in Auckland, recently returned from a trip across the Tasman to race at round five of the Australian Superbike Championships at Queensland Raceway, near Brisbane, and he’s now keen to turn those fresh experiences into top results on New Zealand race tracks.

Hassan leased a Yamaha R6 from Australian racer Josh McGrath and was sent into battle with the leading 600cc supersport class racers in Australia, immediately impressing with his ability to match some of the best in the business.

He said he found it difficult at first to get used to using the ‘control’ Dunlop tyres, but soon adapted and was eventually able to post quick times around Queensland Raceway.

Hassan finished eighth in the very wet first 600cc race and was fifth in the dry second race, achieving sixth overall for the event.

“It was pretty good for my first time on this track and without much track time to set it all up. The competition over there was very stiff too, with the top five or six guys going very fast indeed. These are riders with tons of experience and it was a great chance for me to learn.

“I gained a lot from the trip … tagging on behind some of the fast riders … and I hope to go back and race at Queensland Raceway again, at the final round of the series in about September.”

Hassan’s racing career in New Zealand has been striking, the youngster twice third in the national 125GP class, in 2009 and again in 2010.

He learned his craft racing the tiny Yamaha TZ125 but the tall teenager had simply outgrown that competition in more ways than one, struggling to contort his lanky frame into the saddle.

He stepped up to the 600cc class for the first time in 2011 and – remarkably for a young rider on debut in the category – finished first-equal in the 600 superstock nationals that season, level on points with fellow Yamaha ace Midge Smart, of Inglewood, but forced to accept the No.2 spot on the count-back rule.

This season he was obliged to spend much of the early part of the season sidelined with injury, but bounced back to claim fifth overall in the 600 supersport class, despite completing just five of the series’ 10 races.