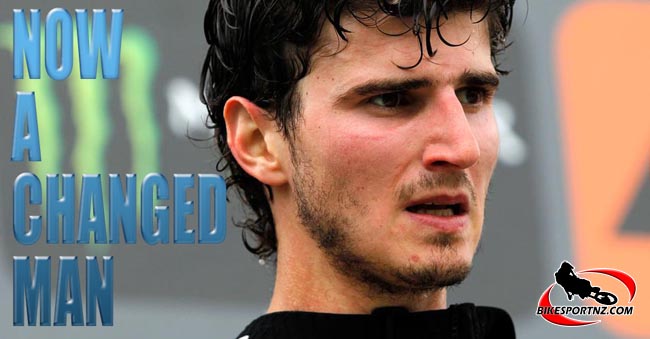 Having gone through difficult times in America and on his return to Europe the crafty Frenchman is finally coming to terms with the complete package of being a Grand Prix racer.

His speed was never in question, and Grand Prix victories came easy when he finally found his feet again. With two GP wins this year Pourcel is still in contention for the 2012 FIM World MX1 Championship. MXlarge journalist Geoff Meyer caught up with him and asked him about his series so far and what it’s like to be back racing the GPs. Geoff contacted his friends at BikesportNZ.com this morning to offer us the feature.

MXlarge: Christophe, it’s been an up and down series for you so far. How difficult was it for you in those first few rounds?

Pourcel: I think at the beginning of the Championship it was good for me to learn, we were working on everything. I mean the bike is from Kawasaki and I had to figure out what I liked and what made me happy. I think it was good to go from there and go with what I like. We also had some issues with the green stuff around the track, it got caught in my wheel in Mexico and that was a pity. It isn’t my goal to lead the championship now. 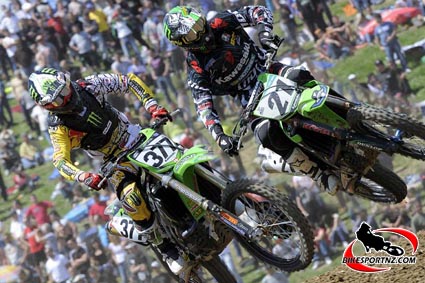 MXlarge: Going in to France last week you had ever done a French GP or not?

Pourcel: I did win a French GP back in 2005 I think. Then my brother won the French GP in 2006, but since then we haven’t been able to win at home. I mean St Jean has never been a track I have done well on.

MXlarge: At times you look like the fastest guy out there. What is your opinion?

Pourcel: I don’t think I am the fastest, some tracks Antonio is faster than me, but when it’s slippery I like it, because I live in the South of France and I ride all the time on those types of tracks. It’s all throttle control and playing with the bike and I am good at that. Antonio is better when the track is super aggressive. He has gotten stronger now, because he has some World Championship in his pocket.

MXlarge: Antonio Cairoli and yourself have had some great battles in the past and this year also. What is the situation with you two, because you have had your ups and downs in the rivalry?

Pourcel: I mean in 2005 and 2006 it was super good with him and we were friends and everything, but in 2007 he wanted the Championship and I wanted the Championship. I wanted to be friends with him, you can ride and be respectful and he wasn’t at all in that season. I was super mad about that in 2007 and I didn’t talk to him for years. Then when I was in America he came over and we talked and he said he was sorry for what happened in the past, so now we are friends and it’s good to have guys like this. I like Antonio and he is a good rider.

MXlarge: How is your confidence compared to when you were battling Canard and Dungey in the AMA Championships?

Pourcel: My confidence is super good now, this team is really good and it’s my team and we have all the guys we know and I never had that in the past. I mean when I was at Pro-Circuit everyone spoke English and I was a French guy. I can trust everyone in my team, and nobody is going to steal anything. The team understands me and this is one of my best years because I feel understood.

Pourcel: I think I was misunderstood when I went to America for two years. I wasn’t speaking good English at all, I wanted to go and win and I thought I could and I did win, but when you win and you are not from there, then I understand they don’t like me. But when the kids on the side of the track write on signs that I are a prick, and that is what happened, it isn’t correct. I mean then they make themselves not proud people, I was one of the best riders and leading the Championship and I wasn’t doing anything stupid on the track, even guys like Dungey and Canard said it’s nice to ride with me because I am clean on the track, but still people treated me badly.

MXlarge: I always saw you as a shy kid who was just doing his own thing. How is it now for you?

Pourcel: Sometimes you don’t know who likes you and I like to have my friends that I trust. I think I am now learning and this sport is mine and I like it and I see all the press guys coming to me I know it’s good, because they want to talk to me because I am doing good. When you are a kid you just want to race and not do anything else. But now it’s fun to do interviews, this isn’t just riding, I own the team and we do the press, I like all the guys and it’s not just about racing anymore.