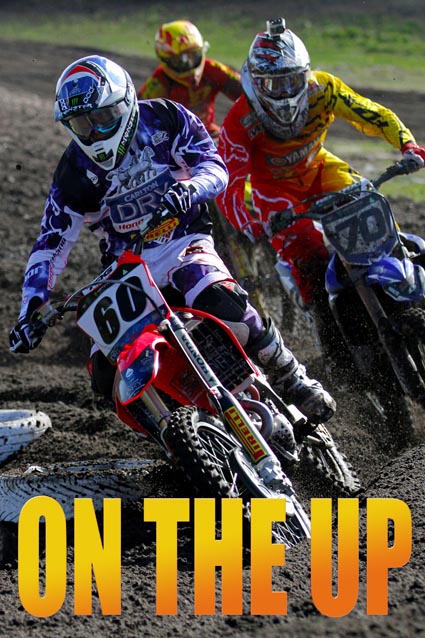 Britain’s Brad Anderson has broken through for his first Australian Motocross Championship victory of the season at Wonthaggi in Victoria this weekend.

However, he is still 20 points behind series leader Josh Coppins, the Kiwi Yamaha ace settling for fourth overall in the MX1 class at Wonthaggi on Sunday.

Two-time British champion Anderson, riding for the Carlton Dry Honda Thor Racing Team, boosted himself right back into championship contention with a consistent effort at round three of 2012, winning the opening moto before going on to seal the overall with second and third place results in the closing motos.

“The first race went really well, I got the holeshot, but towards the end I got a little bit of arm pump,” Anderson reflected. “I felt really good, didn’t feel as though I was pushing too hard and I was able to control the race.

“When the second one came I got another good start was led, but then the dreaded arm pump kicked in again and Todd [Waters] came past. I relaxed a bit and came away with second in that.

“The last race came and that was my worst start of the day, but I came through a little bit and was riding pretty solid. I was able to take third, which I’m happy about, and I’m glad to pull some points back on Josh [Coppins].”

It was a mixed day in the premier MX1 ranks with three separate race winners. Todd Waters (Motul Pirelli Suzuki) finished the round second overall after winning moto two, plus he scored third and fourth place finishes in the remaining motos to lock in his second podium of the year.

CDR Yamaha’s Lawson Bopping completed the podium in his first of the season since joining Craig Dack’s team. Bopping was another to be rewarded by consistency with 2-3-6 finishes.

Bopping’s team-mate Coppins has retained the series red plate as points leader in MX1 after taking fourth overall. It was the first time the Kiwi veteran has finished off the podium this year, but the result means he maintains a 20-point lead in the standings.

Final moto winner Cody Cooper (Motul Pirelli Suzuki) could only manage fifth overall after suffering with starts all day long, but once he got one in the third race, he proved unstoppable in a dominant performance. The experienced Kiwi was quickest all weekend long.

The Motul MX2 class was taken out by Carlton Dry Honda Thor Racing’s Ford Dale, breaking Serco Yamaha Metal Mulisha Racing’s streak in the 250 class. Dale won the third and final moto to clinch the overall after a hard-fought battle all day long.

Dale’s consistency was the key at Wonthaggi with a pair of second places to start the round, before a relentless performance in moto three after battling with Adam Monea (Zero Seven Motorsports Suzuki) handed him his first overall win of the 2012 season.

“Qualifying went well yesterday, which was a good start to the weekend,” Dale explained. “In the first two motos this morning I didn’t get the best of starts and got second in both.

“And then in the last moto I had the game plan to get to the front as quick as I could and go from there – I’ve been struggling with the flu all weekend. I ended up making it through and came out on top.”

Styke was again impressive with the red plate and will maintain it into round four for Serco Yamaha, finishing second overall after winning the second moto of the day. Styke finished third in moto one, but a sixth in the third moto denied him of the round win.

Josh Cachia was impressive with a breakthrough win in moto one after coming under all kinds of pressure from Dale. He claimed his first overall podium of the season in third after claiming fourth and seventh places in the final motos.

A third new winner of the 2012 season was also awarded in the Pirelli MXD Under-19 category, with New Zealand KTM contender Kayne Lamont taking out his first win of the year with 2-1-7 results.

“I’m really enjoying the new power of the two-stroke and it seems to get good starts – except for the last race,” Lamont said after switching from a four-stroke recently. “Qualifying went well for me and the first gate pick helped a lot.

“I had a moment in the first race and got up to second, then in race two I got the holeshot and won it. In the third moto I was 25th through the first turn and got back into the top 10, so it was a good result.”

GYTR Yamaha’s Sam Martin raced to his second podium of the year in second overall after winning moto two, edging out another KTM rider in Kale Makeham for that position on the podium.

Series leader Dylan Long won the final moto and took fifth overall for Choice Motorsports KTM to hold onto that red plate, one position behind round two winner Dylan Leary on yet another KTM.

The series will next head west to Wanneroo in Western Australia on 12-13 May, marking round four of 10 for the 2012 season.