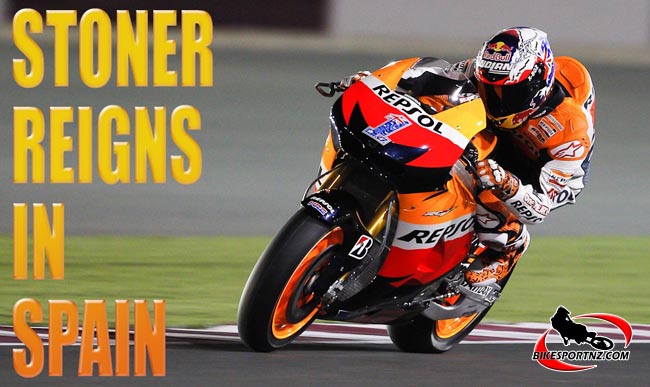 Reigning World Champion Casey Stoner took his first ever premier-class victory at the MotoGP of Spain at Jerez overnight as he fought an epic battle with championship rival Jorge Lorenzo.

After the preceding Moto2 race had been red-flagged due to rain, the weather improved just enough for it to be declared dry five minutes before the start.

The race was a thriller from the start as Repsol Honda Team’s Dani Pedrosa took the holeshot in front of Yamaha Factory Racing’s pole-sitter Lorenzo. Monster Yamaha Tech3’s Cal Crutchlow soon went into third after bumping Nicky Hayden wide on turn six. Such riding was the order of the day for the opening laps, as Lorenzo overtook Tech3’s Andrea Dovizioso with an aggressive move after he had been passed by the Italian shortly before.

Pedrosa’s team-mate Stoner then found his stride and moved to the front as he passed Lorenzo and then Pedrosa. He was soon putting fast laps, yet could was unable to shake 2010 World Champion Lorenzo.

The battle behind was an enthralling affair, which saw Hayden, Pedrosa, Dovizioso and Crutchlow swap positions frequently, before being stretched slightly with 19 laps to go. Pedrosa got the better of the four and started to chase down the pair at the front.

Hayden looked to be struggling with 16 laps to go, as he dropped off the pace slightly and was passed by San Carlo Honda Gresini’s Álvaro Bautista into sixth, and then again by LCR Honda MotoGP’s Stefan Bradl, who took seventh. Meanwhile, Rossi passed Barberá and was looking to close down the eight-second gap to the American.

As the pack settled down somewhat by half race distance, it was Stoner keeping Lorenzo at bay by approximately 0.8s, whilst further down the track, Crutchlow was keeping Pedrosa on his toes for the final podium position. With nine laps to go Lorenzo put the hammer down and started closing on Stoner with the Australian firmly in his sight.

Further down the field, Barberá repeated his Qatar move five laps before the end, as he pushed his way past Rossi back into ninth, while Pedrosa and Crutchlow were giving the front pair something to think about as they closed the gap to only two seconds.

Lorenzo was keeping the home crowd on their feet as he was right on Stoners back wheel with two laps to go, however Stoner reminded people why he is World Champion by upping the pace in the final lap to take his first ever premier-class victory at the Andalucian track.

With Lorenzo taking the second podium spot, it was Pedrosa who managed to keep Crutchlow at bay to hold on for the final podium spot. Sixth place went to Crutchlow’s team-mate Dovizioso, in front of Bautista and Stefan Bradl. Hayden was unable to keep his earlier pace as he finished seventh ahead of Rossi, Barberá and Spies.

A very disappointed de Puniet, who had looked on course to finish top CRT in 12th, pulled off in the last lap with mechanical issues, leaving the way for his team-mate Aleix Espargaro to take top CRT honours.