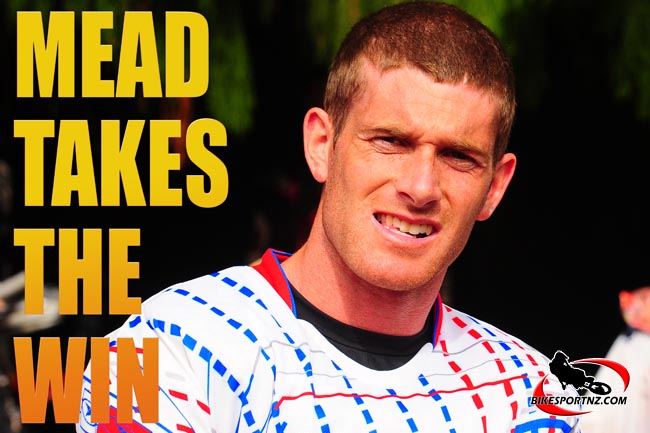 New Zealand riders filled two-thirds of the podium at the latest round of the Grand National Cross-country Championships in the United States.

Only this time the finishing order was different to what it had ever been before, with Wellington’s Rory Mead celebrating his breakthrough first victory in the series and Pahiatua’s championship leader Paul Whibley forced to settle for third spot on the day at the fifth round of the series in Kentucky.

Mead, who raced a Yamaha YZ450F to reclaim the New Zealand Enduro Championships crown last season before embarking on his first full GNCC campaign this year, it was a stunning result.

“The course was technical and fast and the temperatures were hot but I felt good,” said Mead, who is racing a KTM300 two-stroke in the US.

Mead was running fifth as the bikes shot off into the bush following the start but he had taken the lead by the end of lap two.

“I pulled away a bit … I just went for it. Then I cruised near the end.

“This was a track that had not been used before so everybody was riding blind, with no extra knowledge of what to expect, and I’m quite good at doing that. It was a level playing field for once.

“I still need to work on my fitness but my pace was good today.”

Third place at the Mammoth Park City course in Kentucky was enough for fellow New Zealander Whibley to retain his stranglehold on the series lead and, with his chief rival for the title, American rider Kailub Russell, finishing down then order in sixth spot (although still 4th in class).

Whibley even managed to strengthen his grip. Whibley started the day just two points in front of Russell but he is now three ahead of his great rival.

Stuck in the Kiwi sandwich in Kentucky was American star Charlie Mullins, still third in the series standings, but now creeping up to be just 11 points behind Russell.

Mead has now moved up from sixth to fourth overall in the series standings, 25 points adrift of Mullins.