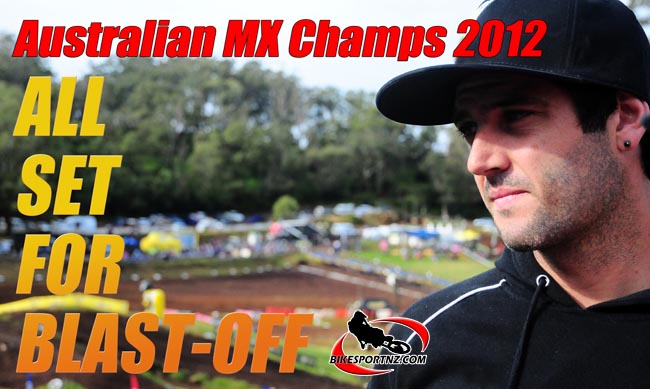 The wait is over with the opening round of the 2012 Monster Energy MX Nationals, the Australian Motocross Championships, set to fire into life at Conondale, in Queensland, this Sunday, April 1.

Conondale returns to the calendar as the first of 10 rounds to be contested during the season, which is tipped to be the most competitive on record with an all-star line-up of international contenders, including a massive contingent of riders from New Zealand.

Defending four-time champion Jay Marmont (pictured above) will vie for a fifth straight MX1 (Pro Open) title after switching to Monster Energy Kawasaki during the off-season, leading Australia’s local charge – and he will be up against the No.1, No.2, No.3 and No.5 MX1 class riders from New Zealand, among others.

“We’ve done a lot of testing and we’ve been working hard, just getting seat time and testing on the 2012 KX450F,” 28-year-old Wollongong resident Marmont said. “The whole package has come together at the right time, but I’m under no illusions and I’m certain that it’s going to be tough.

“Last year I got the championship at the last round, but I haven’t left anything on the table this year and I’ve been putting in more work than ever. This is just what I need to keep me going at the moment and I am excited to race everybody out there for this number one plate.”

Former national champion Dan Reardon will also be another rider in with a chance at lifting the crown, the Brisbane-based 26-year-old spearheading JDR/KTM Factory Racing’s hopes as their lone MX1 contender in season 2012.

“The team structure is great right now, we’ve been really productive during testing and everything like that,” Reardon commented. “I’ve been real happy with the way things are going this year so far and it feels good to be healthy heading into the season.”

No less than 20 world class riders have signed up for the season opener throughout all three national championship classes – MX1, MX2 and MXD – and making for a truly international series on Australian soil.

“I want to use my race craft going into [the AMA season], so at least round one is on the cards for me,” recently crowned New Zealand MX1 Motocross Champion Townley added. “I’d like to repay the fans and everybody involved in Australian motocross, so it will be nice to see people face to face before I head off.”

Sweden will be represented by 20-year-old rookie Calle Aspegren on a privateer Honda, heading to Australia after spending a full season in the US during 2011.

The Motul-backed 250cc MX2 category also has an international flavour, with a new champion set to be crowned since current champion Matt Moss is now based in America flying the Aussie flag for JDR Motorsports and KTM.

JDR/KTM Factory Racing will feature a three-rider Lites team consisting of former champion Ryan Marmont, Josh Cachia and Queensland’s Brenden Harrison when he returns from a leg injury. The team will shoot for a third straight title in the 250s.

Motul Pirelli Suzuki has opted for the international route by signing British talent Steven Clarke, however he continues to recover from injuries sustained last year and will be replaced by New Zealand Suzuki regular Scott Columb for Conondale.

Australia’s top development riders will also be in action all season long in the Pirelli MXD (Under 19s) category. This is the class where riders sharpen their skills before stepping into the pro ranks, as we’ll see in 2012 with current MXD champion Errol Willis joining the MX2 class for Raceline Pirelli Suzuki.