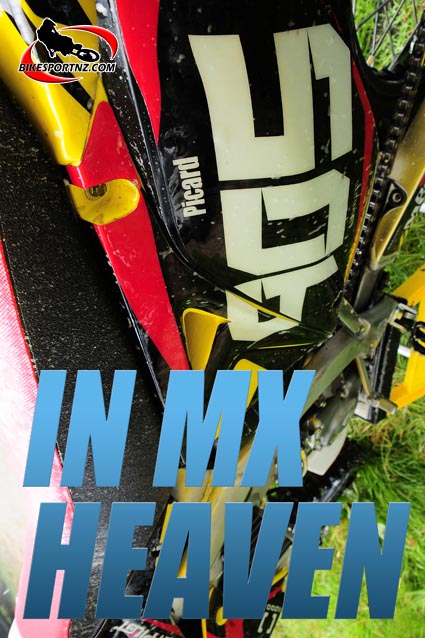 Dion Picard’s recent trip to the United States was more than he ever imagined.

Staying at one of the most prestigious motocross training facilities in America, under the care and support of Colleen Millsaps, the young man from Atiamuri, in New Zealand’s central North Island, revelled in the experience … it was as close as he could get to motocross heaven.

With tracks to train on five days a week, expert coaching, gym sessions and the most full on event ever – three days SX and three days MX, Picard stepped it up big time.

Competing for qualifying place in the finals, Picard achieved more than he dreamed of – 4th overall in 450cc class SX and 6th overall 450cc class outdoors. It was a feat deserving of admiration.

The experience made a solid impression on Picard, amped up his focus, changed his riding style, re-set the confidence bar for the future. Sharon Cox caught up with Picard at the big annual Whakatane Summercross to see how the trip went.

SC: Back from the US, how was the experience at Millsaps Training Facility and racing Mini O’s at Florida 2011?

SC: Tell us a bit about MTF … what was it like?

Dion: It is huge. Tracks, gym, a lake in the middle of it all, bunk houses, mechanics workshop- the training schedule made me learn the most. Colleen eased me into it all – gym sessions, training which went all day stopping only for lunch, change filters and oil. It was competitive riding with 200th seconds separating riders in my group – the group pushed me, that’s why they are so fast at MTF.

SC: The benefit of training at MTF would have been great prep for Mini O’s, what were the most important learning experiences from being there?

Dion: The facility is just so advanced from anything we have in NZ. Keeping track of time, staying focused on training, technique and the push to perform against riders who were as competitive made it for me. Personally I thought my technique was alright, but everyone over there rides with the same style. Look at BT. That’s how they all ride. I had to change my attack position – it was different as I had to use different muscles but as I got used to it, so I’ve stuck with it. Since I’ve been back in NZ, I’ve kept working on keeping that style and it’s definitely improved my racing.

SC: From MTF to Florida competing in the Mini O’s what was the event like?

Dion: It was huge. There was over 40 classes for practice and for qualifying each class was split into 2 or 3 divisions. There were way over 80 qualifying classes for SX and Outdoors. In my class there were 150 Rider’s. Qualifying was different, not on time it goes on races – qualifying is a race which counted for points and then one main for SX and the same for outdoors.

Dion: I ended up dropping the 250cc class, it was just so intense as I was doing all my mechanics, prep and I decided to concentrate on the 450cc. I actually prefer MX over SX, but over there the SX tracks were so different from what we have here in NZ. The SX tracks were classed as amateur, track prep was mint. The whoops were perfect, you could squat down and every whoop was the same height and same distance apart. The guy who built MTF tracks built the tracks at Mini O’s. Yea, it was an awesome 6 days of racing, even though it was 35 degrees and 100% humidity. Colleen helped me out big time in preparation for the event. I was stoked as to get 4th overall in SX and 6th overall in outdoors. I didn’t even think I’d make the top 20. 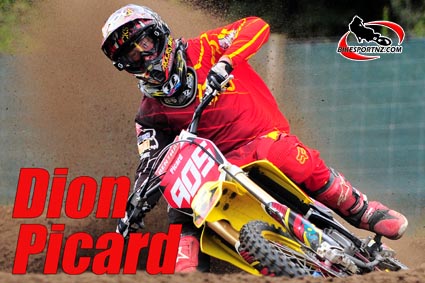