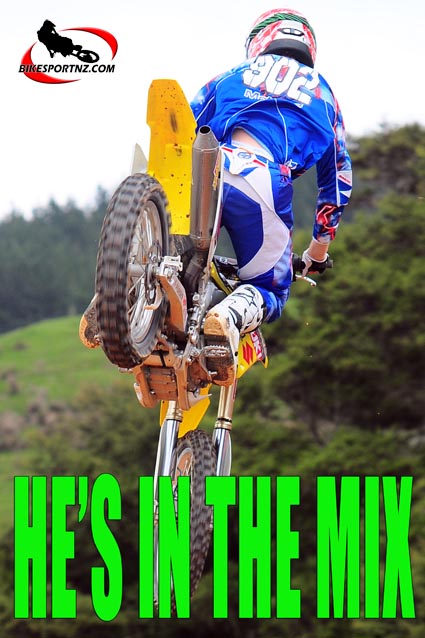 For this 14th round of 15 in the series, Kiwi MX1 champion Cooper was drafted in as a replacement rider for the injured Clement Desalle on the factory Suzuki team and he didn’t let them down.

Despite being called up at very short notice, Cooper cut short his off-season rest period in New Zealand to fly halfway around the world to be on the line in the hottest motocross competition on the planet.

In 30-degree temperatures, Cooper managed to earn himself a spot on the starting grid for tomorrow’s main event.

The man from Mount Maunganui found himself in 29th spot at the end of lap one but, just four laps later, had worked his way up to 23rd spot.

Locked in a battle with Finland’s Antti Pyrhonen (Honda) and flying Dutchman Herjan Brakke (Yamaha), Cooper eventually had to settle for 22nd place at the end of the 12-lap race.

The last round of the FIM Veterans World Cup took also place today in Gaildorf and Pascal Bal became the 2011 FIM World Cup winner, after finishing second overall behind Philip Mercer and ahead of Alfredo Camps.

In Matterley Basin, in England, CLS Monster Energy Kawasaki Pro Circuit’s Pourcel had already proven that he had the speed and the rhythm to fight for the top three positions and, with today’s victory at the MX1 qualifying race, he reasserted his potential.

Pourcel did not have a good start but he managed to get the lead already in lap four.

Red Bull Teka KTM Factory Racing MX1’s Cairoli finished second today in the qualifying race and he will be able to choose a good position at the gate tomorrow. The leader of the series admitted that Gaildorf is not one of his favourite tracks and that he does not want to take many risks to assure the MX1 Title either tomorrow or in Fermo.

Honda World Motocross’ Bobryshev was very surprised with his performance today, as he was not expecting to finish third today after his comeback from the back injury. The Russian is very happy for being able to race again, especially because he did not feel any pain when racing. However, he knows that tomorrow is going to be a long day and he may struggle a little bit to keep the rhythm during both heats.

LS Honda Racing’s Shaun Simpson took the holeshot of the MX1 qualifying race, and although he tried to keep his leadership, he crossed the finish line fourth. The Scot felt really good today and if he gets two good starts tomorrow, he may obtain the best result of the season so far.

Completing the top five was Monster Energy Yamaha’s Steven Frossard, who started from an initial ninth position and managed to climb up to the fifth place. The French rider is the runner up of the series and if he wants to keep the chances up for the chase of the Championship, he does not have any other choice than having a good start and lead both races until the end. However, it will all depend on Cairoli’s performance, as the Italian can be proclaimed the 2011 FIM MX1 World Champion even by finishing fourth in the first race.

Germany’s Markus Schiffer was 13th in the qualifying race and he expects to finish among the top 10 tomorrow, whereas countryman Max Nagl had to pull out as his KTM’s rear tyre jumped off the rim.