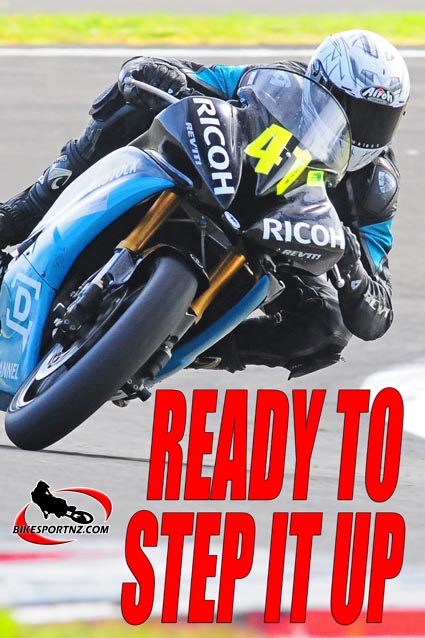 Jaden Hassan doesn’t want to be equal to anyone … he wants to be better.

And it is with that thought in mind that the 17-year-old Aucklander is stepping up from the superstock to the supersport class for the new season’s New Zealand Superbike Championships.

He took a stock standard Yamaha YZF R6 to first equal in the superstock class earlier this year, ending the season level on points with fellow Yamaha ace Midge Smart, of Inglewood, although he was forced to accept second place on a count-back when the tally of race wins was taken into account.

Hassan’s achievement was remarkable nonetheless, the year 13 pupil from Western Springs College shining on debut in the 600cc division.

He had learned his craft racing the tiny Yamaha TZ125 in the 125GP class, but the tall teenager had simply outgrown that competition in more ways than one.

With a lanky 191cm (6’ 3”) frame, Hassan had to contort his body into impossible angles just to crouch on the small bike, but, on the 600cc Yamaha R6 from the start of this year, he was at last really able to stretch his legs on the race track.

Racing at the fourth round of six in the Victoria Motorcycle Club’s popular Actrix Winter Series at Manfeild recently, Hassan showed he was really getting to grips with the bigger bike as he proved himself untouchable in the formula two class.

Hassan won three races from three starts and also rode the bike against the 1000cc superbikes in the formula one class, finishing a creditable 3-2-3 in that category as well.

“I’m already going quicker now than I was during last season’s nationals … and that’s on old tyres on a cold track,” said the young man from Westmere.

“The Yamaha is a 2008-model Yamaha R6 that Jamie Ward has loaned to me, just to help me keep race fit. I’ll have a new 2011-model bike from Yamaha by the time the season starts.

“I figure I will again be fighting with Midge Smart, who I think is also stepping up to the supersport class, as well as Wellington’s Glen Skachill and Christchurch’s Denis Charlett.

“I’ll just ride my heart out and see what happens.”

The 2012 nationals are set to kick off in January.