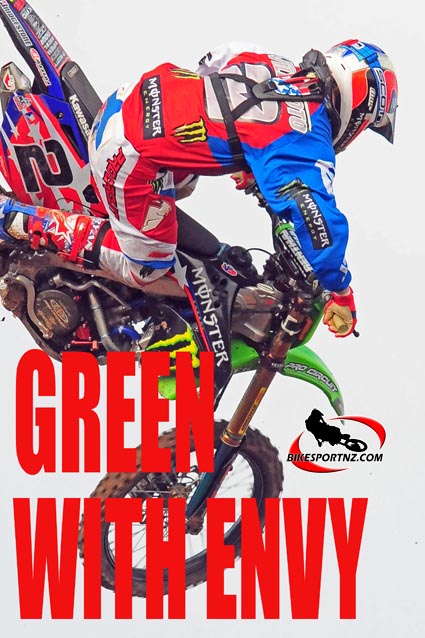 Kawasaki ace Ryan Villopoto cemented his spot at the top of the motocross standings in the United States at the weekend in resounding style.

Villopoto scored back-to-back wins in the 450cc class at the Unadilla Valley Sports Centre facility near New York to stretch his championship lead out from one point to seven over defending champion Ryan Dungey (Suzuki).

It was Villopoto’s second outright win of the season and puts him on target to add the motocross crown to the national supercross title he collected earlier this season.

Meanwhile, it was further celebration for the men in the green Kawasaki camp as Scotland’s Dean Wilson raced his Kawasaki KX250F to back-to-back wins in the 250cc class.

After taking over the top spot in the championship for the first time this season at the previous round, Villopoto entered the day with a scant one-point lead over Minnesota’s Ryan Dungey.

With the Unadilla round falling on his birthday, Villopoto was looking to make a statement, and began the day by topping the time sheet in practice. In race one, he relied on a strong start to move into second behind American Honda’s Justin Barcia. After pacing his rookie counterpart for nearly half the moto, Villopoto made the move for the lead on lap seven and never looked back.

The second race presented a similar situation for Villopoto, slotting into second place after another top-five start, this time behind Red Bull KTM’s Mike Alessi.

Villopoto made short work of Alessi, passing him on lap three and finishing off the day with a convincing 1-1 score-line.

“It was definitely a good day,” said Villopoto. “The team and I made the decision to go to 2012 Kawasaki for this weekend, and it was definitely the right move. Knowing what we had was a lot better, I felt like we were in a great position to win today. I got good starts and was able to work my way through the field. It seemed easy to get by guys. I don’t know if it was the bike, or my confidence, but it’s put us in good position for the championship.”

Dungey battled with Barcia throughout both motos, prevailing each time to earn 2-2 for the day and finish second overall, minimising the damage in the point standings.

“I fought it a bit today,” said Dungey. “I didn’t get the start I needed in either moto. I had to battle through guys, and once I got into second, I couldn’t make the time up on Ryan (Villopoto). We’re looking forward to the next three races, and battling for this championship.”

Through eight rounds in the 250 class, Wilson had captured five race wins to amass the most points in the entire series, as well as the best finishing average of any rider. Despite that, the points leader had yet to claim an overall win in the series.

On Saturday, Wilson left little doubt as to who the top rider was at Unadilla. After posting the fastest lap in practice, Wilson took over the lead early in both motos to pull away from the field and go 1-1 on the day, extending his double-digit points lead.

“It was a great day,” said Wilson. “I was just having fun out there. I feel like when I’m out there having fun, I definitely ride my best. I’ve been angry to not get an overall yet this season, but now I feel relieved. I just felt good and refreshed and excited to race again. I couldn’t sleep last night I was so excited.”

The Lucas Oil AMA Pro Motocross Championship takes a week off, before returning to action on August 27 at Southwick, Massachusetts.

Results from round 9 of 12 at the Unadilla Valley Sports Center – New Berlin, N.Y.