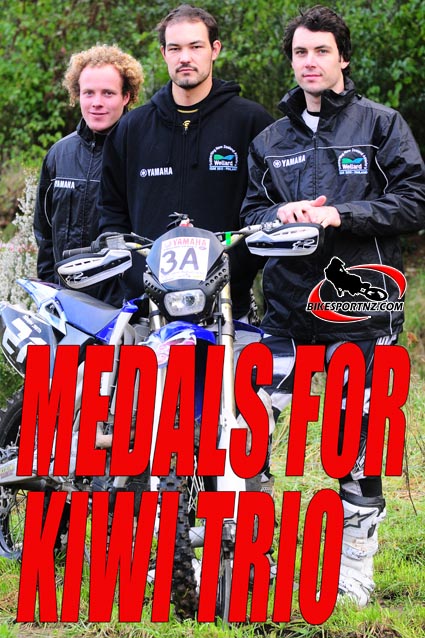 The Kiwis are celebrating a fantastic flying finish in Finland, the trio claiming two gold medals and a silver at the “Olympic Games of off-road racing”.

The Kiwi contingent – Taranaki’s Adrian Smith (Yamaha YZ250F) and Auckland cousins Karl and Chris Power (both on Yamaha YZ450F bikes) – survived all sorts of adversity to finish close behind teams from the Czech Republic and Sweden and at the same time overshadowed elite squads of riders from Wales, Scotland, Ireland, France, Germany, Poland, Belgium, Australia, Canada, Chile, the United States and the British Army Team, to name a few.

In all, there were teams from 63 separate teams entered in the Club Team section of the competition.

Torrential rain, with hail at times, turned some sections of trail and special tests into bottomless bogs at this big annual ISDE, but the Kiwis held firm.

With the mud came overheating bikes, worn out chains, sprockets, wheel bearings and riders. Dealing with all of these conditions, on top of racing for nearly eight hours a day, was no small task.

On top of all of that, all three Kiwis were suffering from the effects of the flu which came with them from New Zealand.

Individually, Mokau’s Smith marked his fifth ISDE campaign as an outright class champion and gold medal winner as he dominated the C1 (250cc) division from day one.

But the battle was very close indeed and, at the end of the six days, Smith finished just 17 seconds ahead of Italy’s Maurizio Gerini (Husqvarna), with Swedish rider Albin Elowson (Husaberg), nearly five minutes further back.

Despite several heavy crashes on day five, Karl Power was able to hold on to finish second overall in the C2 (450cc) division and claim a gold medal, ending the event just 1m 09 seconds behind the eventual class winner, Sweden’s Olle Lothman (KTM).

In the main contest for Senior World Trophy honours, the six-rider home team from Finland prevailed, leading the Spanish and American teams to the top step of the podium. The national teams from Sweden, the Netherlands and Germany rounded out the top six.

Finland’s  Eero Remes (KTM) was the top individual outright at this year’s ISDE. 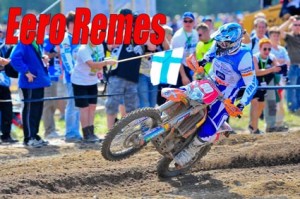 Remes won the E1 class, heading a Finnish 1-2-in the class, with Finnish former ISDE champion Juha Salminen (Husqvarna) winding up the six days just 1m 49s behind him and Spain’s Lorenzo Santolino (KTM) in third, another 10 minutes further back. 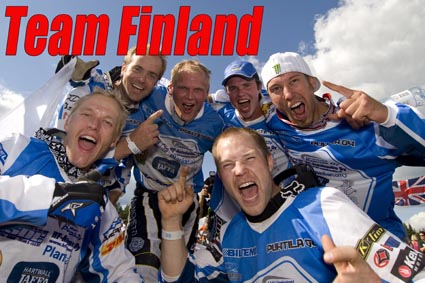