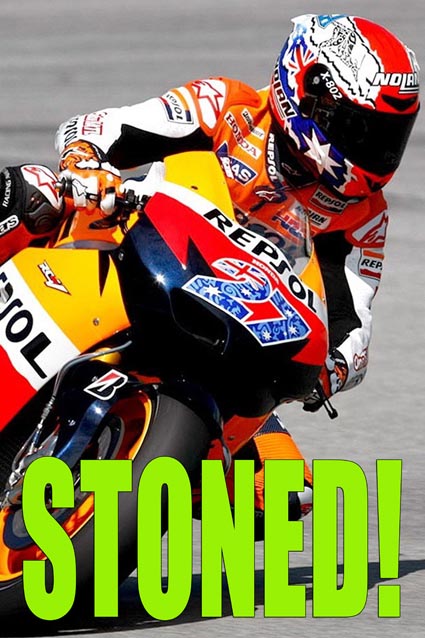 Australian hero Casey Stoner re-imposed himself on the 2011 MotoGP World Championship with a thrilling victory in Sunday’s US Grand Prix at Laguna Seca, the 10th round of 18 in the schedule.

At a track where he suffered a bitter defeat at the hands of Valentino Rossi in 2008, Stoner spent the early laps behind Repsol Honda team-mate Dani Pedrosa as pole sitter Jorge Lorenzo led the way.

The trio of former Laguna winners pulled quickly away from the rest of the field, with Stoner taking second from Pedrosa shortly after the halfway stage, with a neat pass on entry to the Corkscrew.

Stoner was soon locked onto Lorenzo’s rear wheel and made his victory pass in style, riding around the outside of Yamaha’s reigning world champion during the flat-out run up and over turn one, on lap 26 of 32.

Thereafter Stoner quickly pulled a safe advantage and the delighted Australian took his fifth win of the season by 5.634sec at the chequered flag. Having lost points to nearest title rival Lorenzo at the last two rounds, Stoner now heads for the summer break having built his title lead back up to 20 points.

Lorenzo was a safe 3.833sec from third-placed Pedrosa on Sunday, and admitted Stoner was simply too fast for him. Lorenzo was riding sore after suffering a massive highside on Saturday and seemed to appreciate that the points’ loss could have been far worse.

Lorenzo’s team-mate Ben Spies got boxed-in at the start and saw any hopes of a home podium end when he was stuck behind Rossi for the first three laps.

Having finally passed the Ducati rider, Spies inherited fifth when Marco Simoncelli crashed out – for the fourth time this season – then caught and passed Repsol Honda’s Andrea Dovizioso for fourth place near the end.

Rossi and team-mate Nicky Hayden rode together for almost the entire race, the Italian securing sixth by just 0.680sec ahead of former home winner Hayden – but they were 30-seconds from Stoner.

Wild-card Ben Bostrom retired from his first MotoGP event, the 37-year-old pitting his LCR Honda just before the halfway stage after running off track several times.

MotoGP now heads for a two-weekend summer break before the Czech Republic Grand Prix, at Brno on August 12-14.