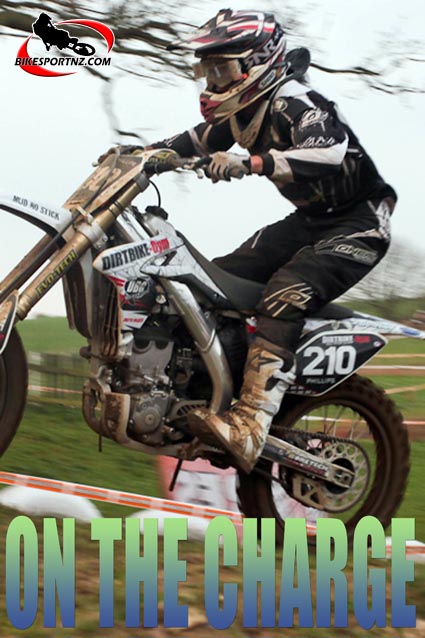 It was a good day for the Kiwi riders at round two of the British Masters Motocross Championships the weekend.

Former GP star Brad Anderson won both MX1 races on the day but, as a non-starter at round one, he is down in eighth place overall after the two rounds.

In the MX2 class, Matthew Moffat and Bryan MacKenzie shared wins to finish the day level on 97 points apiece. That was enough for Moffatt to take over the championship lead from American Zach Osborne, a no-show at the weekend’s second round.

For the two Kiwis in action at the Pontrilas track — Masterton’s Bjarne Frederiksen and Rotorua’s John Phillips — it was another positive performance, with both the Kiwi DBG Suzuki Team riders scoring good points.

Racing in the MX1 class, Fredericksen finished 26th and 20th in his two races, giving him 18th overall for the day and placing him 14th overall after the two rounds.

In the MX2 class, Phillips (pictured above) did even better, finishing 6th asnd 10th in his two outings, good for 8th overall on the day and pushing him up to fourth overall for the series.

A third member of the Kiwi-backed Kiwi DBG Suzuki Team, Hawke’s Bay’s Kieran Scheele, remains on the injured list for now but he will soon be back in action.

Phillips had this to say about his remarkable weekend:

“It was a clay track with lots of ups and downs and had a couple drop offs. It was a sunny day and was really dusty in both races.

“In race one, I got a really ordinary jump off the line but pushed hard into the first corner where I stayed strong and managed to keep upright, even though a couple guys crashed into me.

“I kept pushing hard for the first couple laps and found myself in 8th so I set my sights on 7th and soon passed him. The next lap, I passed 6th, then a few laps later I passed 5th, only to get passed the next lap and drop back to sixth. I held 6th until the end of the race.

“For race two, I got a really good jump off the start line but got pushed wide on the first corner nearly coming off, then nearly came off again on the second and third corners which lost me valuable positions.

“I pushed hard on the first lap and got up to 8th. Then on lap two I mucked up a couple sections and dropped back to 10th.

“I made a couple aggressive passes coming into corners on a couple riders only to have the same thing happen to me when I left the gate open coming round a corner, getting my front wheel taken out and going down.

“I picked the bike up really fast but had dropped back to 12th. I managed to catch up to 11th and make a pass a few laps later and got 10th a few laps after that. I rode out the rest of the race in 10th.

“It was a pretty good day. I was really happy with how the bike was going and how I managed to come through in the first moto. I’m a bit disappointed with how far back I qualified and how I got taken out, so I will be working hard on getting those right before the weekend.”